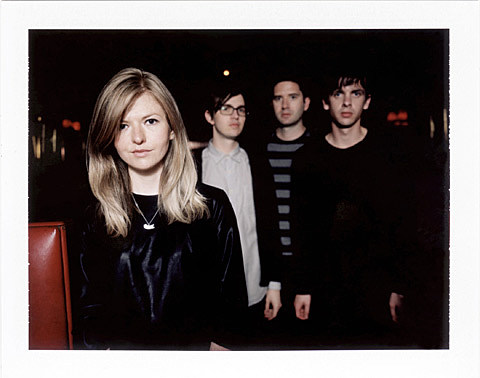 I think Wednesday is my favorite day for CMJ day parties. You get a lot of good bands, but it's not insanely packed like the weekend shows. And this year, there are a lot of great Wednesday afternoon options.

Before we get into it, I would like to say that Spotify has been a giant help in checking out music from bands playing and if you have the service, I recommend using it. (If you don't, chances are someone you know has invites to give out.) Much easier than Googling for Bandcamp, Soundcloud or (heaven forbid) Myspace sites. Spotify doesn't have everything, but it has most everything. I've got a CMJ 2011 Playlist that I update when I find something new and interesting which you're welcome to check out.

[editor's note/update/disclaimer: Spotify has partnered with us on all BV CMJ events this year, but Bill did not know that when he wrote that above paragraph, so please no conspiracy theories!]

PICK OF THE DAY: Under the Radar party at Public Assembly has a line-up that is pretty hard to beat, including one of my favorite bands of late, Still Corners whose chilly, majestic debut, Creatures of an Hour, came out last week on Sub Pop. Check out an MP3 of new single "Into the Trees" at the top of this post and you can stream the whole album at the bottom. Public Assembly is good and dark, ideal for their trippy accompanying lightshow. Still Corners also play Public Assembly Wednesday night which must be nice for them not having to schlep their gear around. They also play tomorrow at our day party at Knitting Factory and then the Sub Pop showcase at Mercury Lounge that night. 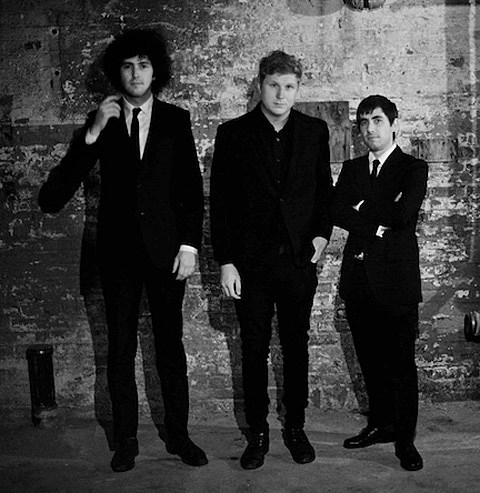 THEN AGAIN... the folks at Terrorbird Media have put together a pretty great show at Cake Shop. It kicks off with newish, shit-hot Brooklyn garage-soul band The Immaculates who are worth showing up early for. Check out an MP3 at the top of this post. Then it's Virginia's Eternal Summers who have really come into their own since expanding from a duo to a trio. 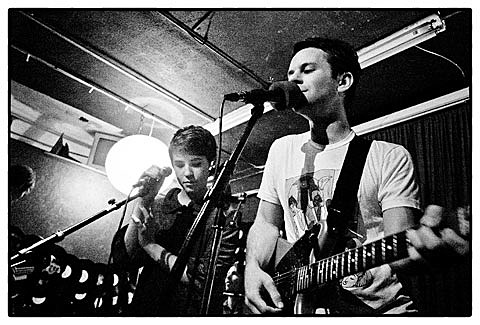 Then it's Gospel Music which is Owen Holmes who used to be in CMJ 2007 buzz band Black Kids but now makes indiepop somewhere between Stephin Merrit and Jonathan Richman (which is a definite sweet spot for me.) Holmes got help from Hefner's Darren Hayman, Camera Obscura's Traceyanne Campbell and others on last year's Duets EP, but for his full-length debut, How to Get to Heaven from Jacksonville, FL,  he shares the mike full-time with fellow Jacksonville resident Madeline Long. Check out an MP3 of first single "This Town Doesn't Have Enough Bars For Both Of Us" and watch the video (which features his old Black Kids pals) at the bottom. Gospel Music's other CMJ dates are down there as well.

Of course the nice thing about the Lower East Side is that every venue around there has a day show. At Pianos there's the We Listen For You party with Arms, Guards, The Pass, Parlovr, Nerves Jr. and Headless Horseman in the main room; upstairs it's the Big Hassle Media party with Radiation City, Aeroplane Pagaent, Clubfeet, Marques Toliver, J. Viewz, Pyramids and Army Navy. 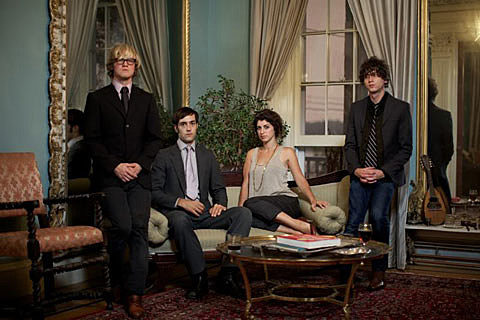 If you're in the Ludlow area, do try and check out Portland's Radiation City (3PM) who've made one of the year's more charming debuts which drifts between moody, organ-driven numbers and more upbeat pop. Papercuts covering The Free Design? Add in some Mazzy Star smokiness and you're almost there. Check out "The Color of Industry" at the top of this post, and go seem them live at some point this week. Radiation City also play the PASTE party at The Living Room today too (4PM) and have shows this week, and all dates are at the bottom of this post.

That PASTE party, which goes from 4 - 7 PM also features Lord Huron, Santah and The Lonely Forest.

And finally over at Fontanas (which you may remember from BV day parties of old or episodes of Louie) is this year's Pirate! Island party with a pretty good bunch of bands too: Canada's Hollerado, Nick Diamonds, Fairmont, Army Navy, The Great Book of John and The One & Nines. Set times at the bottom of this post.

Click through for flyers (including a couple day shows I didn't mention), streams, videos and set times. I'll have Wednesday nighttime picks a little later. 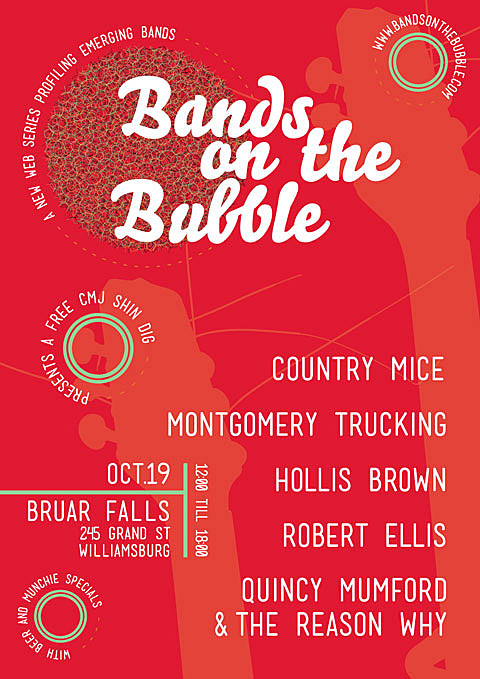 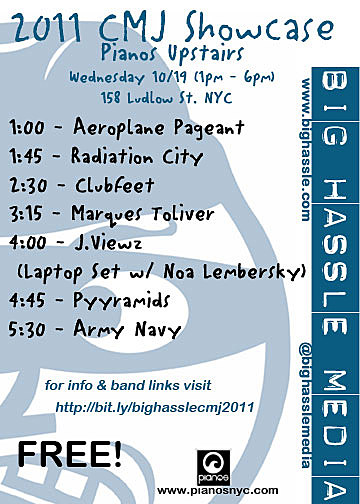 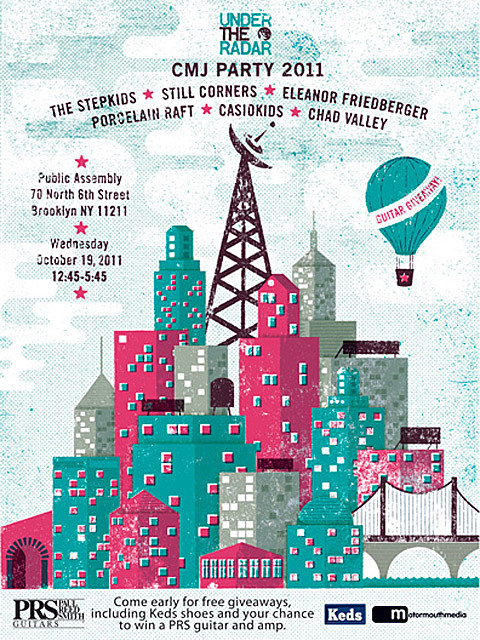 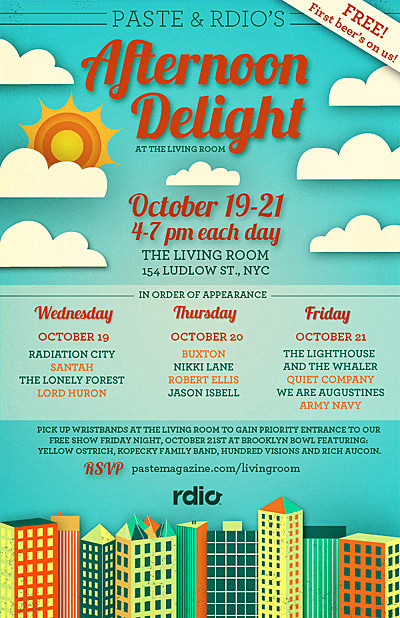 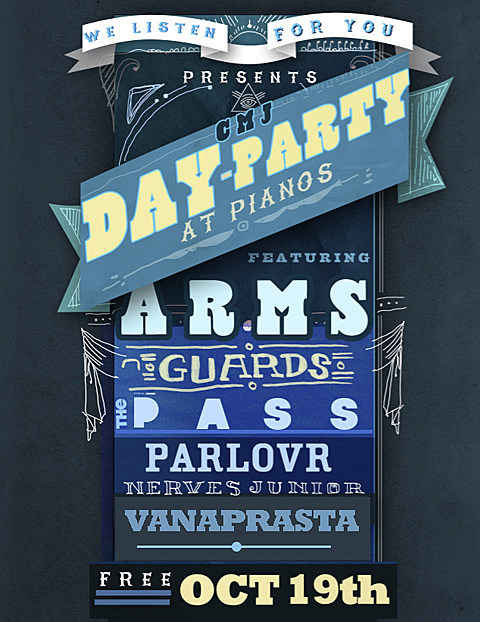 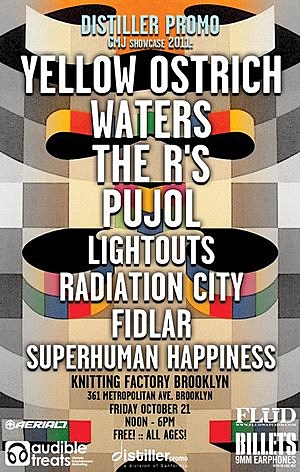 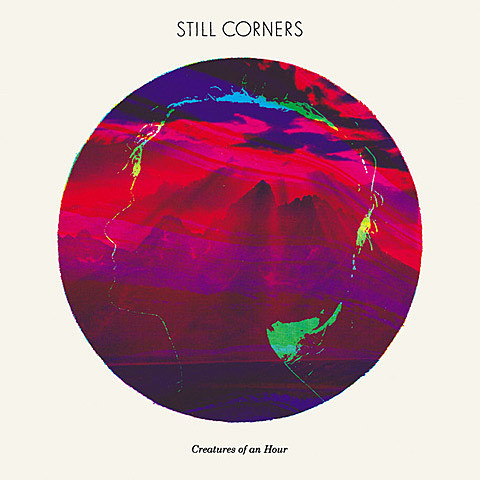 Still Corners - Creatures of an Hour by subpop