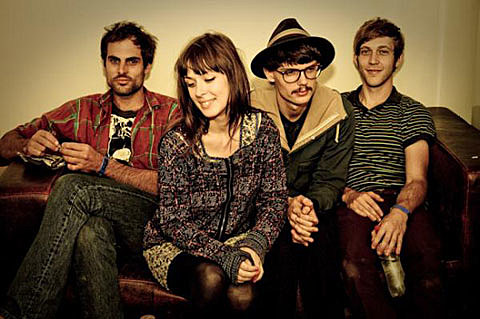 Thursday, we're in the thick of it now and maybe some of us are already frazzled. Which might explain why this picks post is shorter than yesterday's. Also, we're starting to see a lot of the same bands, so see this as a reminder as to what's happening where. This isn't comprehensive, just what I personally recommend. I've tried to include set times at the bottom of this post for all parties mentioned.

Hopefully you're going to stop by the BV Day Party at Kniting Factory which has Yellow Ostrich, Still Corners, Hundred Visions, Forest Fire, BOBBY, Main Attrakionz and the just added We Were Promised Jetpacks. Yellow Ostrich kicks things off at 12:30, hope you can make it down. There's free PBR & HobNob Wine too for those over 21. 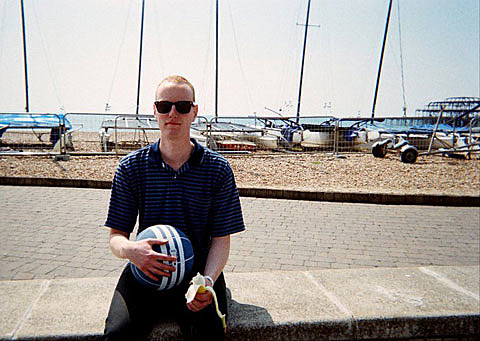 You can make a day of it in Williamsburg, and we wouldn't grudge you for venue hopping. Public Assembly's got the Pop Montreal party today, with Miracle Fortress, Pat Jordache, Teen Daze, Tops, Tonstartssbandht, and Touchy Mob... plus food courtesy Mile End. Maybe some Montreal-style bagels? 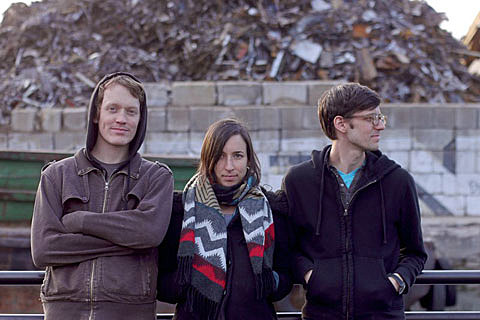 Over at Bruar Falls it's the Camper's Rule Records party, with Radical Dads (if you're from out of town, one of my favorite new local bands), plus Fort Lean, Backords, Beat People, Easter Vomit, Yanqui, and Moonmen On the Moon, Man. Plus, you're running out of chances to hang out at Bruar Falls... it closes at the end of the month. 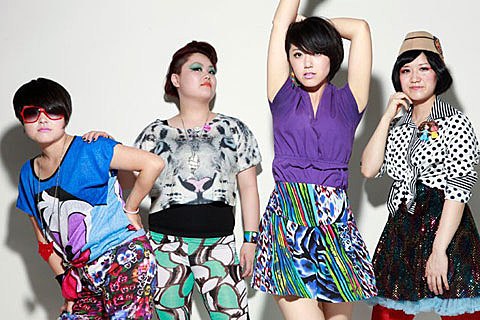 And at The Woods, there's a cool afternoon/early-evening party being thrown by the folks at all-girl-drummer zine Tom Tom, with a great line-up of bands that, yes, all feature ladies behind the kit. There's Baybee Teeth, Coasting, TEEN, The Suzan, Pearl & the Beard, Brute Heart and Satellite Sky. $5 cover for this one. Let's hope the sound has improved from last year's CMJ-week shows, which was a joke.

Of course it's hard to deny the allure of the Lower East Side, what with five or so clubs all within a block or two of each other, making for very easy show-hopping. The two best are on the same Ludlow Block. At Cake Shop, NYC Taper has indie rawkers Mr. Dream, the widescreen pop of Savoir Adore, the dreamy/dusty sounds of Widowspeak, superior psych group White Fence, the dark anthemecism of Hoop Dreams, plus Prussia and Teletextile.

And at Pianos,I Guess I'm Floating and Tell All Your Friends PR have two floors of fun, with a few Canadians (Grimes, Parlovr, Doldrums), one Australian (Little Red), dance music (Beat Connection, Body Language) and lots more. Full schedule is below.

Okay, those are my daytime choices of choice. Flyers and set times, some for shows not mentioned above, are below. 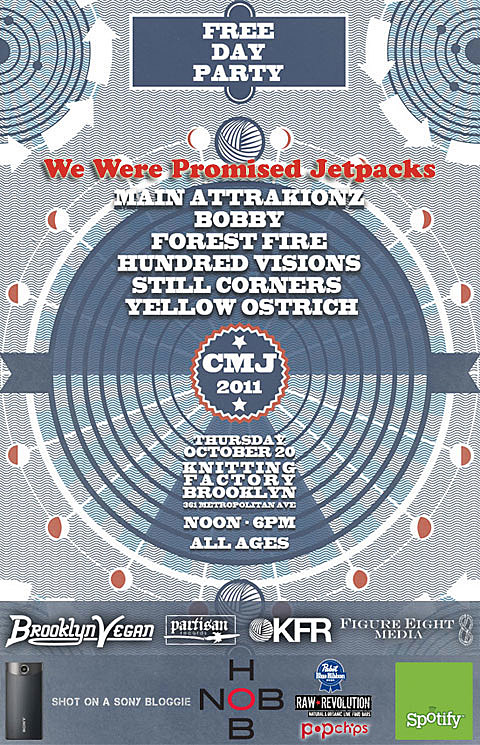 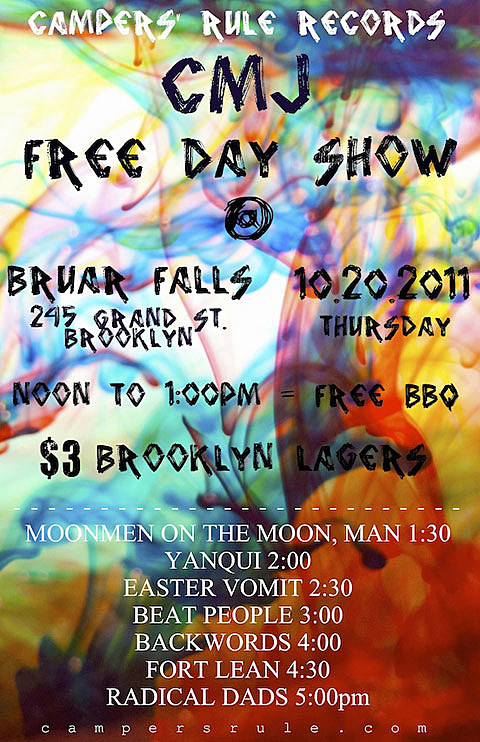 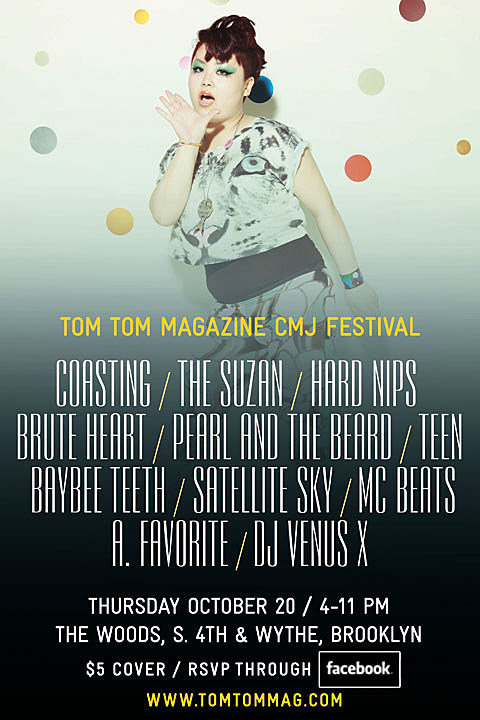 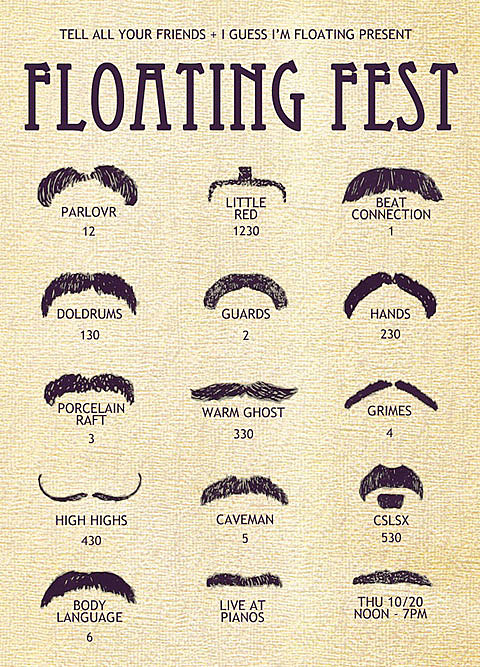 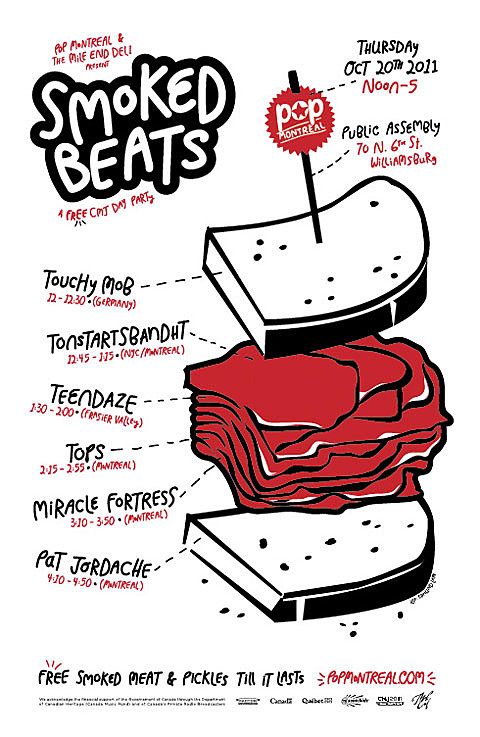