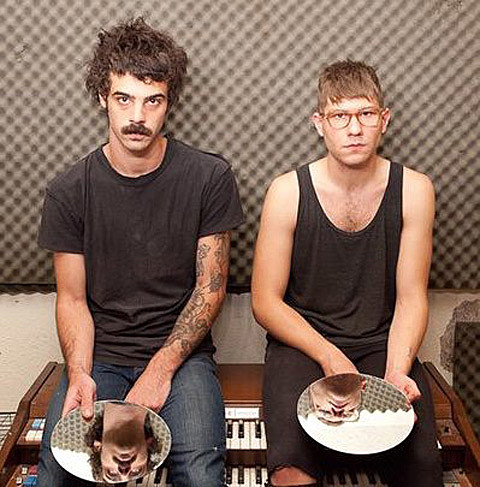 After a quiet day, there's no shortage of excellent evening shows for this first night of CMJ 2011. There are just my suggestions -- check CMJ's much-improved (though still not quite helpful enough) schedule for a full rundown of official showcases.

After studying the schedule, my pick for single showcase of the night is the Lefse Records/Banter/Waaga showcase at Pianos which has more than a couple bands of interest on the bill. Among them: Denver duo Gauntlet Hair whose album is out today on Dead Oceans, featuring some densely-layerd ANCO-inspired pop. (Check out an MP3 at the top of this post.) Also playing: San Diego's Cuckoo Chaos whose song "Just Ride It" has stayed in rotation on my stereo for a while now. (You can d/l that above too.) There's also laptop Canadian Teen Daze (who maybe you caught at the Creators Project), Chicago's A Lull, Atlanta's terrific Balkans, and the blissed-out Sun Glitters. It may not have the biggest names on the bill of any show tonight, but who knows where many of them will be in six months? $10 without a CMJ badge. 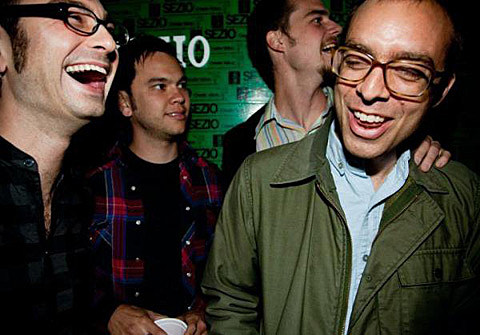 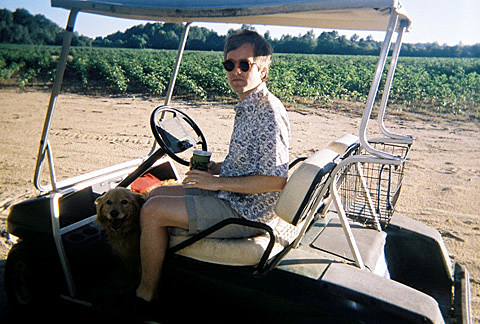 Coming a close second...Public Assembly, a club no one ever seems to go to for shows in non-festival times, has one of the most solid weeks of any venue in the city. (I'm not just saying that because BV has day shows there Friday and Saturday, either.) Tonight the front room is the Car Park/Paw Tracks showcase with icy synth queen Class Actress, Southern charmer Dent May, Cleveland power-poppers Cloud Nothings, plus Young Magic, Adventure and Light Asylum side project Jimmy Whispers. In the back room, it's the Mexican Summer showcase with the goth-electro of Light Asylum, West Coast droners Date Palms, Boston indie folk act Quilt, plus Radio People, Home Blitz and Xander Duell. 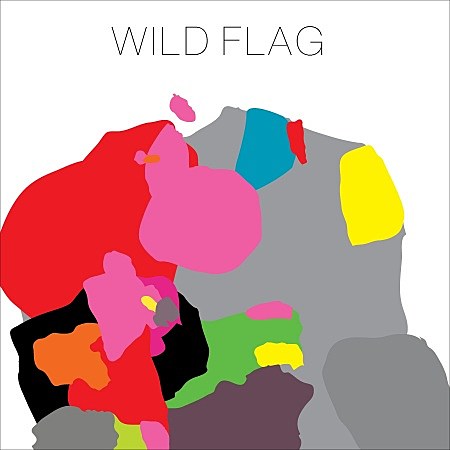 Meanwhile, Merge Records is at Bowery Ballroom for what will be one of the more difficult shows for badgeholders to get into, as supergroup Wild Flag are headliners. It's sold out but they're letting in "limited badges" so if you have one, go early to A) make sure you get in, and B) to see the wonderful Hospitality whose teriffic debut album comes out on Merge in January. In between, Eleanor Friedberger, making for a fine evening of female-fronted music.

At Glasslands, our pals at Stereogum and Popgun are throwing a party with a slew of cool band they've already told you you need to see. Such bands as anthemic Jersey dudes Titus Andronicus, the instrumental magic of Delicate Steve, the nu goth sounds of Chelsea Wolfe, '90s indie rock lovers Mr. Dream, crazy catchy Canadians Holerado, and Cuckoo Chaos.   $15 with RSVP. and if you have a CMJ badge you get a discount of some sort (wither badgeholders' privilege).

At Cameo, the very helpful show listing site Oh My Rockness is having their showcase which also doubles as a 7th Birthday party for the site. (Remember when you had to rely on Village Voice ads to find out when shows were happening?) It's a good line-up, too with eager beavers Dive, slinky tribal sounds of Zambri, nouveau synth poppers Adventure, Chad Valley, Even Voytas, Headless Horseman and Wise Blood. $8 if you don't have a badge.

You've got a couple opportunities to see underrated UK act The Duke Spirit tonight, both of which are free whether you have a badge or not. 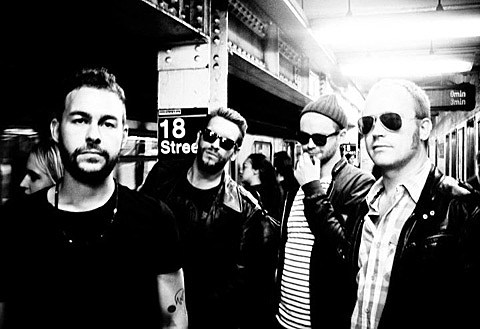 If you're into gloomy postpunk a la The Chameleons or early Bunnymen, you might want to head to Lit Lounge to catch The Foreign Resort (8PM) who do that sound pretty well. You can check out a stream at the bottom of this post.

Dovecote Records is having a CMJ Kickoff party at Club Norwood tonight, with the very hotly-tipped Araabmusik, plus Supreme Cuts. 9PM. RSVP by emailing RSVP@DOVECOTERECORDS.COM but there's no gauranteed entry. Go early. Flyer below.

What are YOU going to see tonight? Flyers, streams and set times are after the jump. 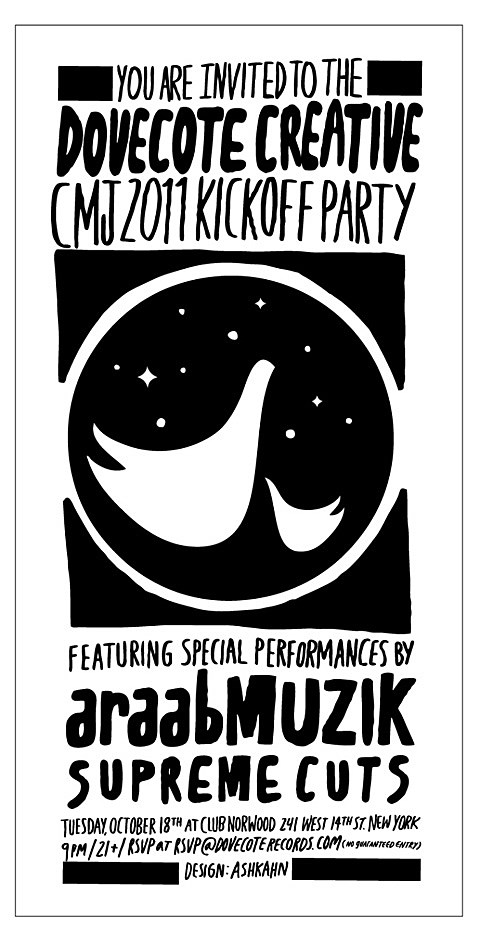 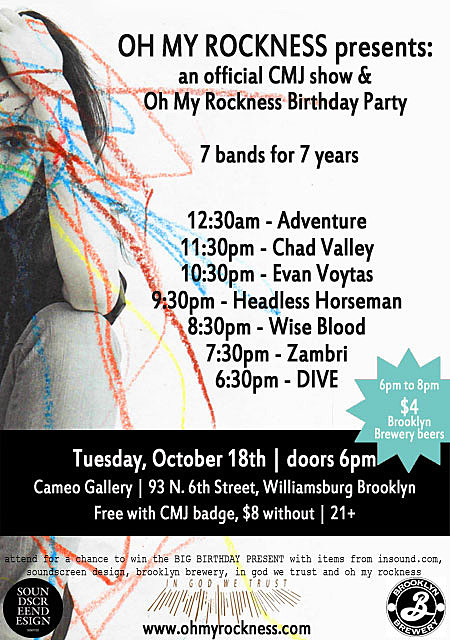 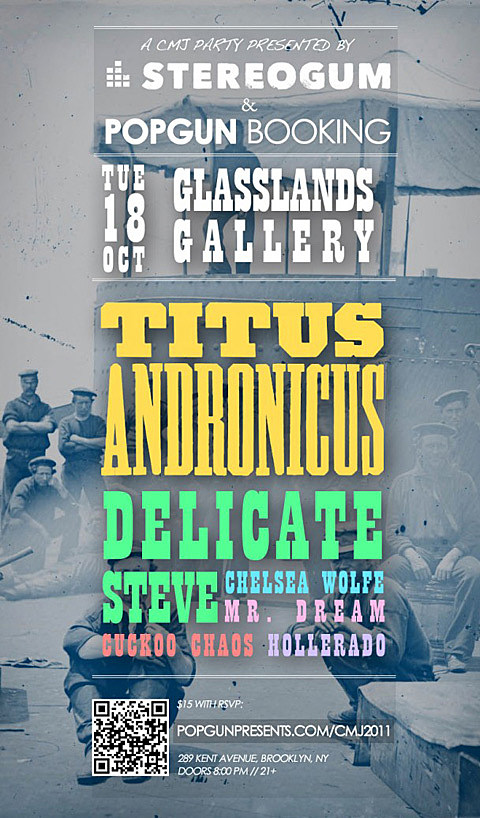 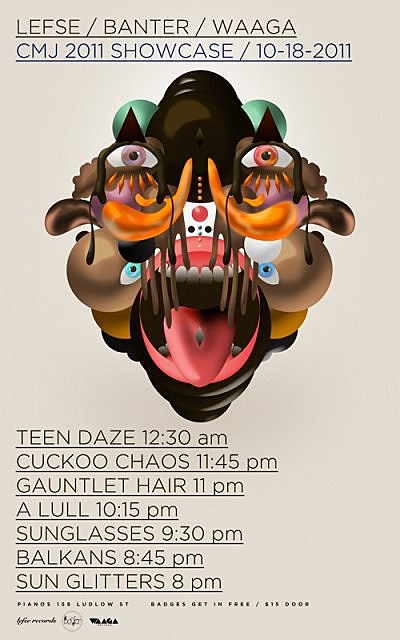