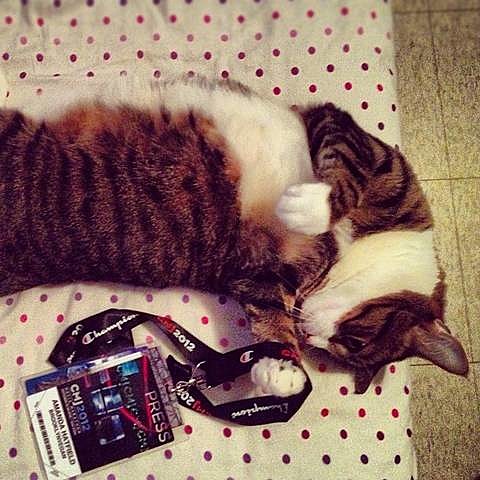 Oh hey, it's CMJ time again (Wednesday to be exact). Here's a little recap of what BrooklynVegan did on Tuesday (10/17) night with some you-are-there type Instagrams. (Follow along in real time with @Brooklynvegan on Instagram or @BVpics and @bvCMJ on Twitter.) Here we go... 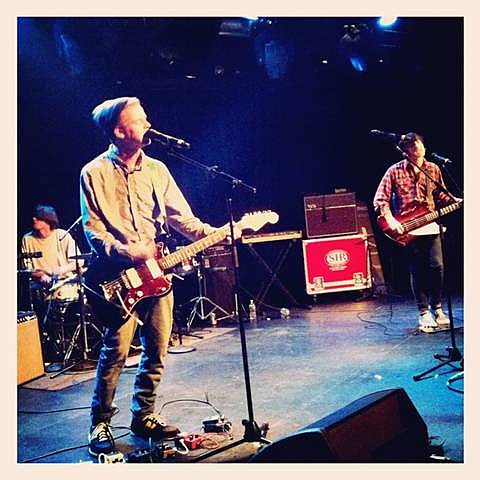 I was a little thrown off Tuesday as my original plan revolved around seeing French acts Bertrand Burgalat and Juveniles at the Union Square Ballroom. When both canceled last-minute, I had zero plan. After picking up my badge (a breeze) at Judson Memorial Church, I headed over to Le Poisson Rouge for some of the New Zealand showcase that's become an annual CMJ kickoff event at the Village venue. I caught the latter half of Ghost Wave (horrible name, but pretty good classic Flying Nun-style indie) and stuck around for about half of Die! Die! Die! whose blitzkrieg punk was certainly fun to watch.

I then hoofed it over to the L.E.S. where fellow BV writer Andrew Sacher already was... (-Bill)

Indians @ The Living Room (via @llllbfgllll) 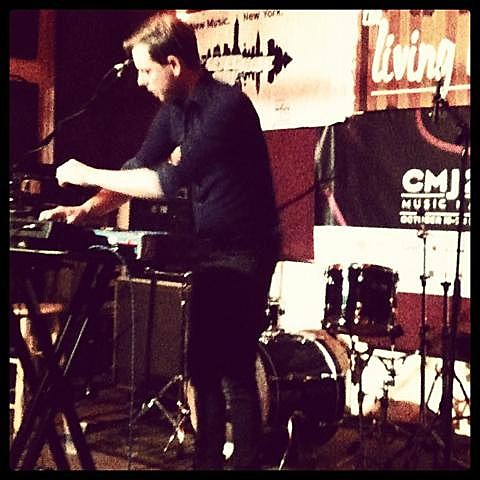 The ease of making a record by yourself in your bedroom has inspired countless artists to do so, resulting in a ton of filler, but every now and then some real gems pop up. If you're looking to find a new one of those gems at this year's CMJ, Copenhagen's Indians (aka Soren Lokke Juul) is a good place to start. He played his first CMJ show at Living Room last night (10/16) for a WFUV showcase, and though he didn't have the highest attendance (early Tuesday is tough), those who were there were attentive the whole show. Rather than hiding his voice behind reverb or distortion like many of his peers, Soren's voice is his strong point. He belted out every song while providing piano, acoustic guitar, drum loops, and ambient backing tracks. Even on his own everything was well put together, so when Soren begins playing with a full band (like the one in his 4AD Session video), it feels pretty safe to say it's gonna be great. You can catch Indians again tonight (10/17) at the Hype Machine party at Brooklyn Bowl and Thursday at Fader Fort. 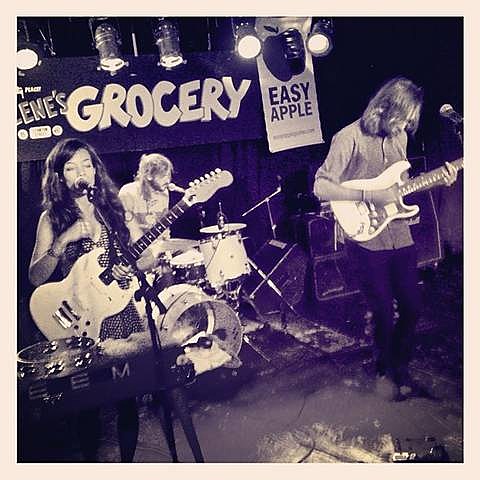 Boston's Quilt made their way over to NYC last night for their only CMJ show this year, the Easy Apple/Vinyl District/Beyond Beyond is Beyond Records showcase at Arlene's Grocery. The band have been in NYC a bunch of times (they called it their home away from last night) but I've somehow managed to miss them every time until last night, and glad I finally caught them. They filled the venue with trippy Haight-Ashbury vibes, and still managed to sound fresh despite their obvious lineage to an era which is almost half a century old. I guess I had assumed they'd be playing acoustic guitars, but they went strictly electric and still captured the delicate folkiness of the record -- plus it allowed them to throw in some noise freakouts. The band were charming on stage too, cracking tongue-in-cheek jokes about how Flea is no longer in their band, and they gave a shoutout to Bob Weir, who turned 65 yesterday and said he was on stage with them on spirit (which also came off as a joke, but to some extent, they weren't wrong).

If you haven't heard Quilt's self titled LP which came out in 2011 on Mexican Summer, you can stream it at bandcamp. They'll be back in NYC to open for The Fresh & Onlys on November 8 at Music Hall of Williamsburg. Tickets for that show are still available.  (-Andrew) 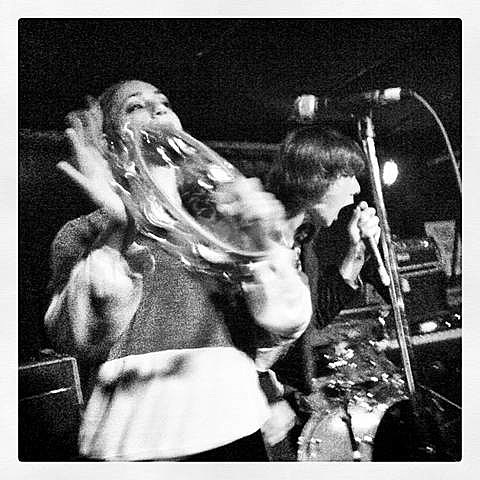 After seeing Quilt at Arlene's Grocery with Andrew, I walked over to Mercury Lounge (a trip Michael Cera needed a car for in Nick & Nora's Infinite Playlist) for the showcase put on by our West Coast blog friends Aquarium Drunkard. Waiting in line to get in I met, Foxygen singer Sam France's two aunts and grandmother who were very, very proud of him. Not sure if they had an influence on me, but I thought Foxygen was the best thing I saw last night, a confident melange of late '60s / early '70s psych pop and glam that was exemplified by the closing number that seemed to merge "Under My Thumb" and "Suspicious Minds" into a new baby. France was a funny frontman too who seems to really enjoy the frontman role. Catch them at our day party on Friday. 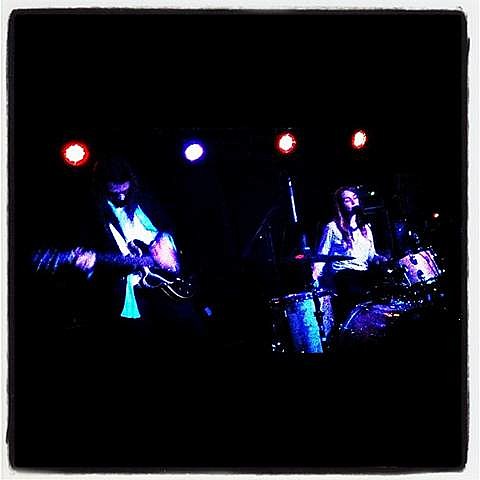 Los Angeles trio Tashaki Miyaki were up next. I enjoy their hazy sound (Mazzy Star-esque as noted before) but they were not completely on their game last night, though their laconic vibe is a tough follow to Foxygen's showmanship. I spent much of their set trying to figure out how leftie guitarist played his righthanded instrument upside down. (Some brains just work that way.) Still, current single "Best Friend" sounded pretty sweet, and they should be a nice soundtrack to the early afternoon of our Saturday day party at Public Assembly (where you can catch them again while getting a free tattoo).

BV photographer Amanda Hatfield (her cat Rufus is at the top of this post), who had been at Ben Gibbard's intimate HiFi show earlier in the evening, tried to get in to Mercury Lounge but found it sold out, or badged-out or both. Some venues adopt a one-in-one out policy during CMJ, others give you a stamp that allows you to get back in anytime and others have the old "no reentry" policy, though you don't see that so much in the 10 years since the smoking band came into effect. Whatever way, it pays to show up early to something you really want to see. 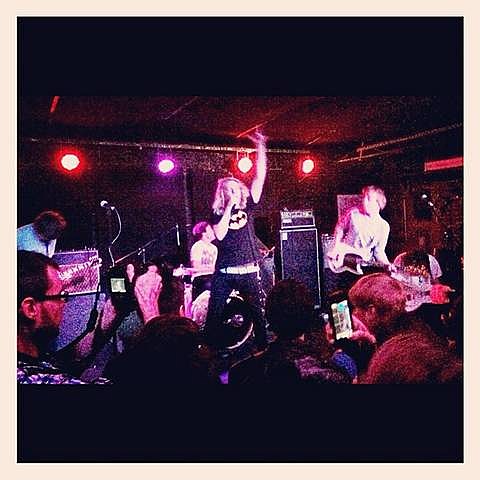 At midnight it was the NYC debut of Chicago's The Orwells whose album is out on Autumn Tone records (which is run by Justin of Aquarium Drunkard). All still in High School (or should be) and looked it too, they cranked out a hyper set of angst-fueled garage pop driven by wild-eyed frontman Mario Cuomo (not that one) who stalked the stage and generally went apeshit. In a well-worn Batman tee, he definitely brings the danger to The Orwells that otherwise look like someone's nice younger brothers. They were all clearly stoked to be playing New York City. They're playing many times this week, including an opening slot on our Saturday day party at Public Assembly.

Then I went to bed. It was only Tuesday, plenty of late nights to come. (-BIll)

What are you seeing tonight?

Savoir Adore played two CMJ shows last night, and one as part of the pre-CMJ Conflict of Interest party on Monday night at Rebel NYC. We missed all three, but check out a video from the Monday one, and a video of Spacehog playing "In the Meantime" at Rockwood Music Hall (true story), below...

Spacehog "In The Meantime" at Rockwood Music Hall - CMJ 2012