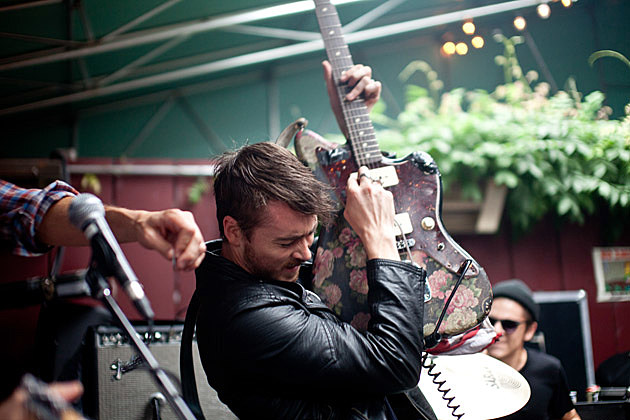 CMJ is upon us here in NYC, which means hundreds of artists from around the world will be playing too many shows to keep track of over the next five days (10/13-10/17). If you're feeling overwhelmed at all about who to see, we've narrowed things down to a list of, appropriately, 15 that we really think you should try to catch. We also made a Soundcloud playlist featuring songs from the artists (except a few that aren't on Soundcloud).

Check that out, and all of our picks, below...

Destruction Unit: Arizona psych punks Destruction Unit were here in NYC just a few months ago and they have a handful of shows planned for CMJ, but they're truly one of those bands who are different every time you see them. If you can, catch them twice or maybe three times at CMJ. It's a real trip.

The Gotobeds
The Gotobeds make attitude-heavy, snarling, railing-against-everything punk-informed indie rock. If you dig Protomartyr and Parquet Courts or Pavement or The Fall (or Wire), this is pretty much essential listening. The band are currently recording their debut album for Sub Pop.

Hooton Tennis Club
Liverpool's Hooton Tennis Club fall somewhere between Pavement and the Pastels -- a return to the kind of indie that often got called "slacker." In a good way, mind you, their debut album is all hooks -- especially the very catchy "P.O.W.E.R.F.U.L. P.I.E.R.R.E."

The Lemon Twigs
Formed by brothers Brian and Michael D'Addario, Long Islands The Lemon Twigs who are a) still in or just out of high school, b) jaw-droppingly accomplished and c) somehow sound like 10cc or The Raspberries. You may not believe what you're seeing/hearing so, catch them if you can.

Neon Indian: Neon Indian is one of the rare artists who came out of the chillwave craze and still manages to keep progressing and make interesting music. His third album comes out this week so it's perfect timing to see what kind of live show he's got in store for us this time.

No Devotion: It's possible that Geoff Rickly has actually been more prolific since Thursday went on hiatus then he was during that band's existence. One of his current bands, No Devotion, is atmospheric rock that's similar at times to Thursday's last record, No Devolucion. He also runs a label, Collect Records, which BrooklynVegan is co-presenting a showcase with on Wednesday night. No Devotion plays, along with Wax Idols, Creepoid and Foxes In Fiction.

Panda Bear: Panda Bear spawned tons of imitators after the release of his Person Pitch album, and as many of them remain forgotten, he continues to progress in interesting ways. This year's Panda Bear Meets the Grim Reaper keeps the futuristic Brian Wilson-isms we know and love intact, but it explores new ground too. He has three CMJ shows, all of which are sold out, so get there early if you're using a badge.

Petal: Scranton, PA's Petal is led by singer/songwriter Kiley Lotz, but they first came to our attention thanks to the contributions by the two core members of Tigers Jaw, whose 2014 album 'Charmer' isn't too far removed from the new Petal album. One of her shows is the BrooklynVegan party at Baby's All Right on Saturday.

Protomartyr
Having made one of 2014's best albums, Detroit powerhouse Protomartyr have managed to equal, if not better it on the just-out The Agent Intellect. Powering this beast: inventive guitar playing, a tight rhythm section and the bleak, wry worldview of frontman Joe Casey.

S: Carissa's Wierd singer Jenn Champion has been making music under the moniker S since before Carissa's Wierd broke up, but last year she released her first full-band album under that moniker and it's really great stuff. S played last year but we didn't get to catch her, so we're glad to get another chance.

SAVAK
It was sad news when Obits called it quits in April, but guitarist Sohrab Habibion and bassist Greg Simpson continue to play together in new band SAVAK. Co-fronted by Michael Jaworski (The Cops, Virgin Islands), the band make taught, mutant punk...and sometimes rotate drummers mid-set. They came out of the gate roaring back in May and we can only imagine have gotten better since.

Sheer Agony
Montreal's Sheer Agony made a strong splash with the debut 7" back in 2012 that showed off their brand of mutant powerpop that owed more than a little to Chris Stamey and his work on those first two dB's albums. Their debut album, out soon on Fixture/Couples Skate, goes a little '60s a la The Kinks. Live shows are frenetic.

Stealing Sheep
Liverpool's Stealing Sheep are somewhere between late '60s faery folk and early '80s synthpop, for a sound that is modern and unlike anyone else. (Well, maybe Metronomy.) The band's second album Not Real delights more with repeat listens.

Superheaven: If you miss the kind of '90s rock bangers like "Cherub Rock" and "Everlong," Superheaven's newest album Ours Is Chrome is chock full of them. And they wreck live. One of their shows is the BrooklynVegan day party on Friday at Baby's All Right.

The Wonder Years: The Wonder Years are a polished pop punk whose ambitious new record No Closer to Heaven is good enough to win over people who otherwise never listen to polished pop punk. It's a cathartic release that anyone who's ever lost a loved one can relate to, and it's even more intense live. They have two NYC shows in support of it (though only one is a CMJ show), and it's worth catching Motion City Soundtrack and You Blew It! opening both dates. They aren't on Soundcloud but you can listen here.