CMJ continues... along with the deterioration of my health.

I started Day 2 back at the Museum of Television and Radio for The Arcade Fire live on KEXP. KEXP's staff removed all the chairs, and packed seven band members, one dj, a lot of equipment, and as many fans as possible into the fairly compact studio. 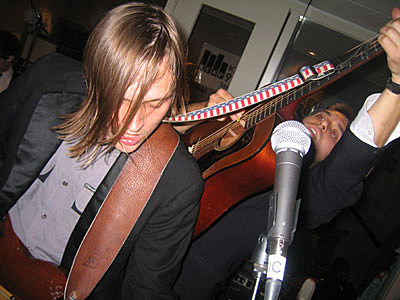 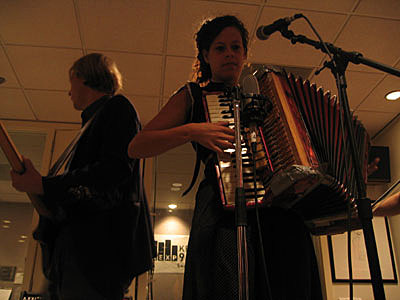 Just because they were on a radio station didn't mean The Arcade Fire were gonna (yes...'gonna') tune down their performance. Audience members were climbed on, band members choked each other, and valuable, framed posters were used as drums (which the museum asked them to stop). Their five song set, set the museum on fire (that pun goes out to Win's father). They had played all five of the songs the night before, but this time they sounded even better for whatever reason.

From KEXP I headed southwest to the mermaid-less Coral Room for, possibly the kitschiest event of CMJ, Baby and Har Mar Superstar. 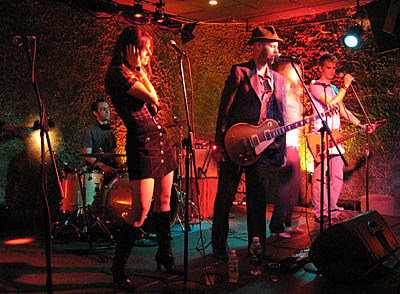 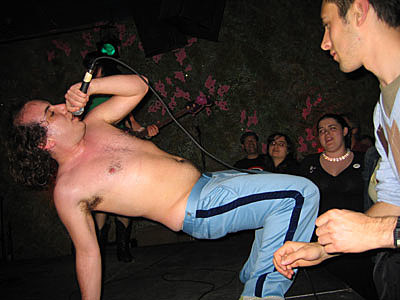 Baby put on a killer show (100 times better than the last time I saw them at Mercury Lounge), and Har Mar rocked the house. He knows how to work the ladies.

After Har Mar, I headed further south to CB's Gallery where the night ended perfectly with an extremely powerful, emotional set by Jonah Matranga (previously Onelinedrawing, front man of Gratitude). 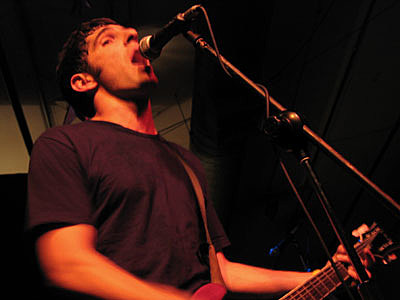 I'm not too excited about tonight's prospects. The Sufjan show seems good, but I've seen him too many times, and to see all the bands, you need to be at Mercury Lounge for about seven hours. If you have any recommendations, please let me know.

I'll definitely be skipping all afternoon events again. If you're looking for something to do:

Trail of Dead & The Concretes are DJing The Fader party which includes a bunch of bands, also at 2:00 pm.