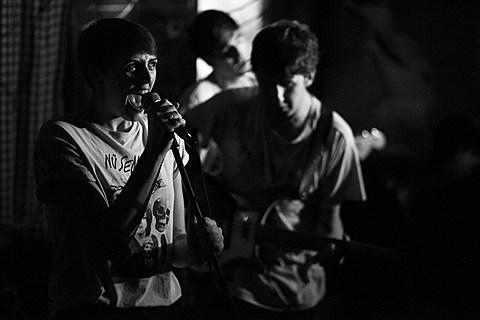 We're in the midst of a crazy-as-usual CMJ -- we're on day 3 (10/17) -- and the headaches and lack-of-sleep are already kicking in. But it's all worth it for the many hours of live music. We already talked a bit about seeing Joanna Gruesome yesterday, and here's some more highlights of our Wednesday (10/16) of CMJ... 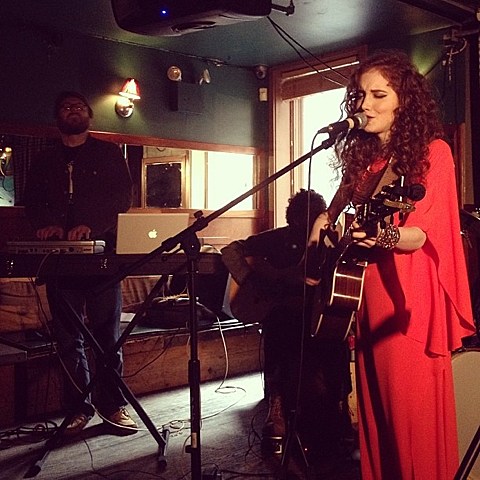 After I saw Joanna Gruesome downstairs at Pianos, I headed upstairs to catch young Chicago singer/songwriter Bonzie. I was a little skeptical about her potentially being a bit too on the manufactured-pop side, and there is definitely some of that, but she's also got a great voice and is clearly determined to be a memorable performer as well. Bonzie's got the kind of folky pop songs that are very much in style (and successful), but she and her band add some quirks to them that recall early-mid '00s freak folk more than they do Mumford & Sons.

Other than Joanna Gruesome, the best thing I saw at Pianos had to have been Bleeding Rainbow. They mentioned on stage that they're working on a new record (expected to be out February 2014) and were playing a lot of songs from it, and man were these new songs good. Their last record -- this year's Yeah Right -- is mostly poppy shoegaze (not that there's anything wrong with that), and they've always been heavier live than that album would suggest, but these new songs were sounding like some of their most driving, punkiest stuff. They often worked practically-screamed vocals, Sonic Youth-y string bends, and dirty power chords into their set -- not the typical elements of a band tagged as shoegaze and indie pop. - [AS]

Bill here... like ships passing in the night, Andrew left for Webster Hall and I got to Pianos for the night show that was happening in the upstairs. CMJ is about the only time to see full bands up there where's no stage, giving things more of a DIY feeling. I got there just in time to catch Brooklyn's Gross Relations who bang out '90s-style crunchy, keyboard-friendly indie rock a la The Rentals or The Pulsars. They do it really well and if you've never checked them out, their live show is a lot of fun. Their record's good too.

Next up was the band I came to see -- and whom Andrew had just seen downstairs at Pianos -- Joanna Gruesome. Already a big fan of their terrific debut, Weird Sister, I knew they were not going to be your quiet type cardigan-wearing indiepop band live, but they really threw themselves into their performance, and around the room a bit too. They're a no holds barred band -- a bit wild and wooly but holding it together -- and the packed room was fully into it. In addition to album cuts like the "Sugarcrush," "Secret Surprise" and "Madison" they turned Galaxie 500's dreamy "Tugboat Captain" into a killer noise-jam. I haven't seen Hookworms yet but Joanna Gruesome are my CMJ band to beat.

BV photographer Dominick Mastrangelo happened to be there too and was kind enough to send a few JG pictures which are in this post.

From there I headed back to Williamsburg for the NME showcase at Glasslands. Leeds, UK's Eagulls are a band I've been wanting to see for some time. Coming on stage in a long coat, George Mitchell looks like the singer of a British postpunk band, and has the sneery stage presence -- and Northern England drawl -- to back it up. Kicking things off with excellent new single "Nerve Endings," they blasted through their short, fierce set with nary a nod to the audience. They play our BV day party on Friday (10/18). 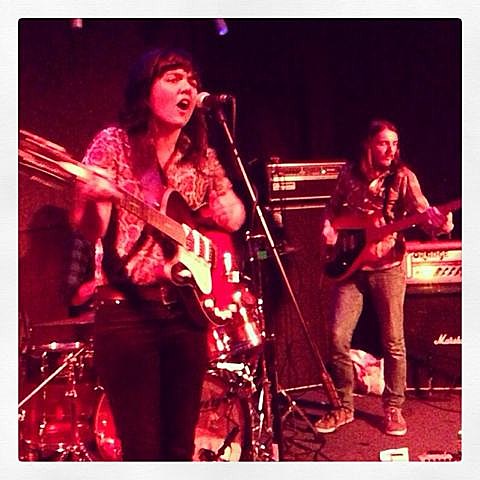 Then came Australian singer Courtney Barnett who is my kind of singer-songwriter: funny, charming, unassuming and un-singer-songwritery. With a rhythm section backing her up, sonically she's more in the garage-psych world (in an almost Kinks kinda way) with her almost stream-of-consciousness story style lyrics driving things. She can rock but you leave remembering lyrical phrases as much as the music. And I left smiling with much of both.

You can catch Courtney a bunch this week, including the BV day party on Saturday. -[BP]

Now back to Andrew... 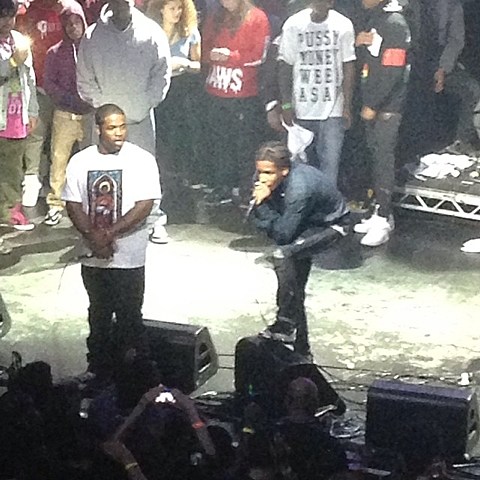 I spent my entire night portion of CMJ Wednesday at the Mass Appeal/Grooveshark showcase at Webster Hall, where we got sets from promising young Brooklyn rapper Bishop Nehru, punky duo The Bots, A$AP Mob, Casey Veggies and Schoolboy Q. A$AP Mob's set was only billed to feature Twelvy, Ant, and Nast, but A$AP Rocky and A$AP Ferg came out for the last few songs, including big Ferg songs "Work" and "Shabba" (video below). Ferg and Rocky were pretty much the stars of the night, but before they came out the rest of the Mob proved they could put on a fun show without them too. It wasn't long ago that A$AP Ferg wasn't a well-known solo artist yet, and it doesn't seem out of the question for other A$AP Mob members to start getting recognized for their own careers too.

Schoolboy Q's set included no guest appearances, but he did bring out new TDE signee Isaiah Rashad to do two of his own songs, and it wasn't hard to see what TDE sees in this guy. But back to Q. I don't think the place was sold out but it was pretty packed and Q had the whole crowd going nuts for him. When I saw Schoolboy Q in NYC earlier this year, the penultimate song in his set was his big song "Hands on the Wheel," which he cut off early saying he was tired of that and wanted to move on to new material, so he ended his set with the then-new single "Yay Yay." It was fun (and funny), but almost came off like he was forcing the crowd to be into his new stuff. This time around, he didn't need to do anything of the sort. He played "Hands on the Wheel" in the middle of his set without commenting on it, and ended the set with two of his new singles, "Collard Greens" and "Yay Yay." He not only pulled it off, but the crowd seemed more into those songs than his older stuff. I think we're all ready for that new album, Schoolboy Q. Check out a video from last night below. - [AS] 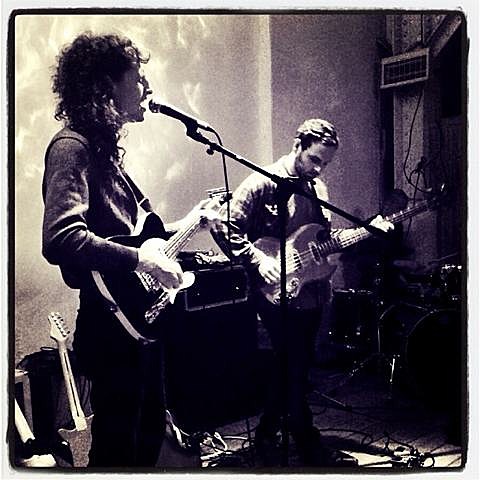 Yuck headlined the Glasslands show but went on laaaaaate as drummer (and American) Jonny Rogoff announced from the stage that the rest of the band were a bit slow in getting here due to visa issues (they were supposed to be here Tuesday) and airport security and such (but not a blizzard like their first US show).

I didn't stick around -- Yuck (who are all here now) are playing our BV day party on Saturday -- and went a few doors down Kent to Ran Tea House for the Terrible Records show to catch Regal Degal. The trio spent a year in Los Angeles which definitely did them some good, they are much tighter band than before they left. They're still making somewhat obtuse, arty music -- think 154 or The Pop Group with The Fall's repetition repetition repetition -- but it's never indulgently weird. It's naturally weird. And the rhythm section (Jamen Whitelock and Josiah Wolfson) is just killer. 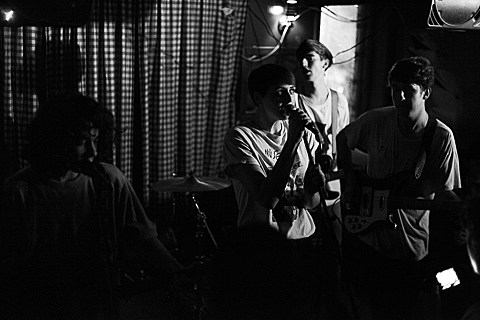 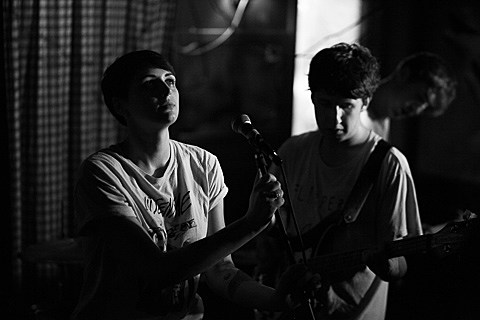 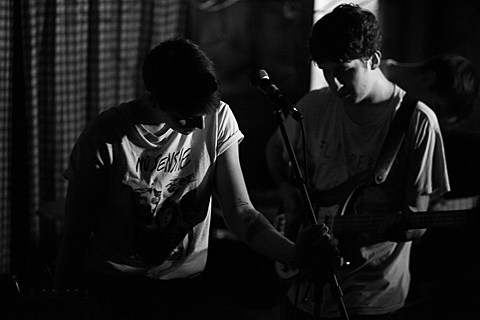 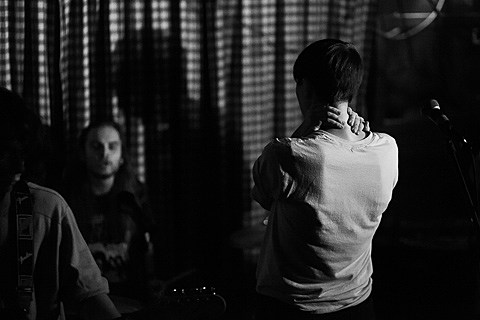 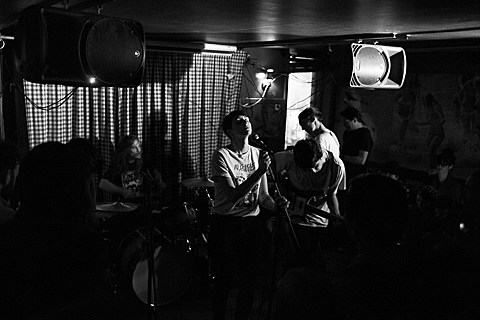