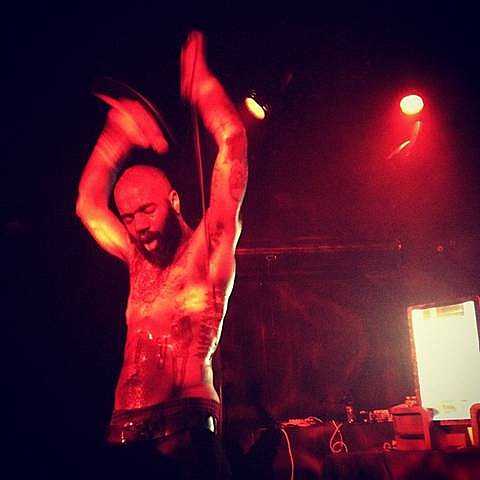 On Wednesday (10/17), CMJ was well under way and day parties were widespread across the Lower East Side yesterday (and to a lesser extent, Williamsburg). Andrew was out and about, like at the Terrorbird party at Cake Shop: 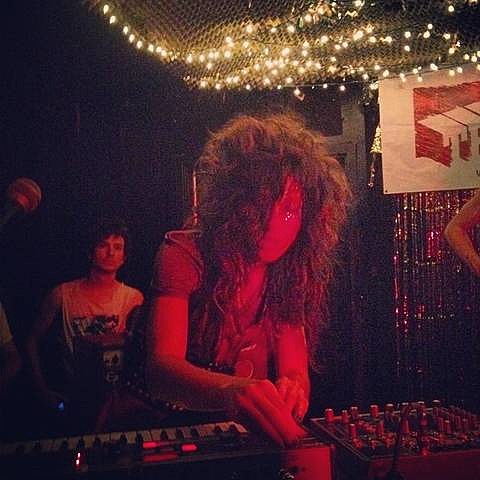 Says Andrew: "It was pretty easy to go in and out so it probably never hit capacity, but Cake Shop was still packed all afternoon for the Terrorbird party. I got there around 4 and caught great sets by Pictureplane, Prince Rama, Mykki Blanco, and Jerome LOL. How were the earlier ones that I missed?" 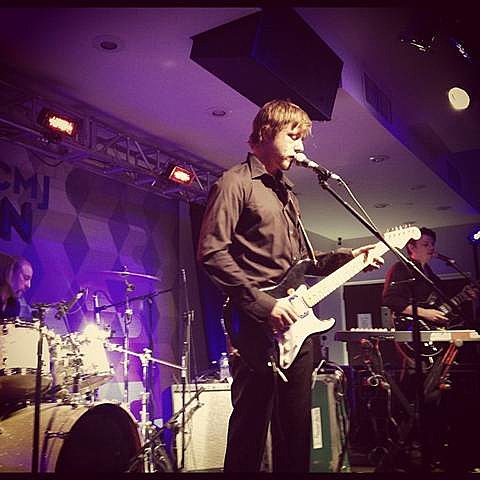 Stay tuned for better pictures from that. She later crossed paths with Andrew at Cake Shop, but also spent time at the Tell All Your Friends Party at Pianos where she caught Braids, and then they both headed over to Le Poisson Rouge for Ali Shaheed, Buke & Gase, Death Grips, and Flying Lotus which was by all accounts a bananas show. 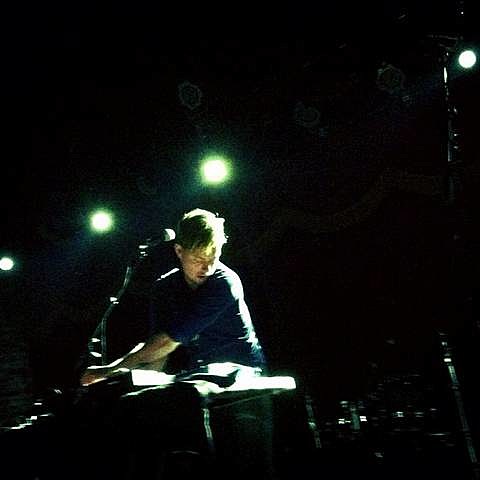 My CMJ Wednesday started a little later than planned a quick plop-down in the couch turned into an hour disconap, but I made it down to Brooklyn Bowl for Hype Machine's party to see Danish artist Indians. Andrew wrote a nice little recap of his Tuesday set at Living Room which I agree with but will say a bowling alley is maybe not the right place to see a one-man electronic act that is mostly downtemo, somber music. That said, he's got a great voice and would love to see him again not in a 7-10 split situation.

The big news from his set was that Indians pressed 500 copies of his 4AD debut on vinyl in plain brown sleeves to sell just at CMJ. The album won't actually be out till January, so this is a real treat. I wanted one, but wasn't going home anytime soon, so maybe I'll pick one up at one of his other shows this week.

I left the Hype Machine party before The Neighborhood went on, but the band did give me a glow-in-the-dark sticker while I was looking at the Indians vinyl at the merch table. Thanks, guys! I hoofed it up Wythe to South 2nd and poked my head in to Death by Audio to see what time METZ were going on (late) and then rounded the corner onto Kent to hit Glasslands for the Stereogum party where the line stretched long outside. I was lucky I managed to get in, but others weren't. The NY Times was there in the weeds, talking to folk in line, "many of them in fashionable clothes and carrying iPods."

When I got inside, I found things running late and heard the "Thank you, goodnight!" from Io Echo (who play our day party on Friday [10/17). Port St. Willow, who also played the NYC Taper show at Cake Shop today, were up next and sounded nice, but were maybe a little to mellow to follow a dance-y act. 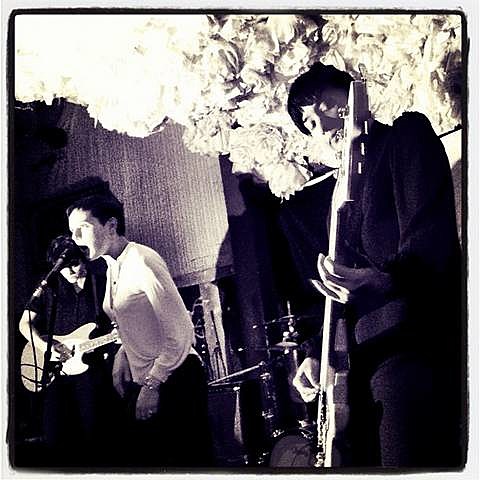 After their set I worked my way up front to catch Savages, the real reason I was there. As I wrote earlier, they kinda knocked me out. (Their rhythm section is insane.) Mind you, I am a sucker for this kind of sound (gothy post punk a la 1981) but Savages are the real deal. They play our day party Friday (10/19, 2:30) which you should totally try to make. Skip class, call in sick...whatever you have to do. It's a great line-up (The Intelligence! METZ!) and totally free. 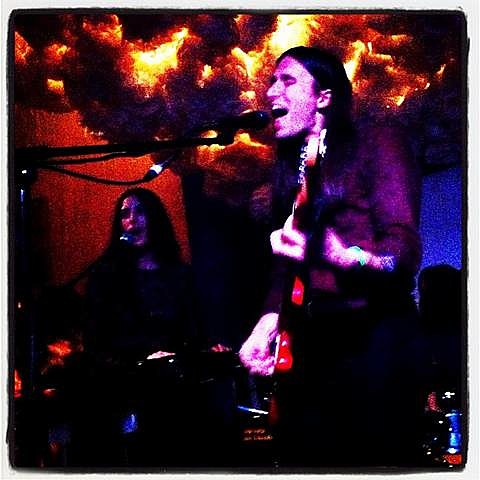 Guards (ex-Cults member Richie Follin's band) we up next and played a fine set of rousing, sing-a-long rock. Follin remarked it was nice to be back at Glasslands where they played their first-ever show. 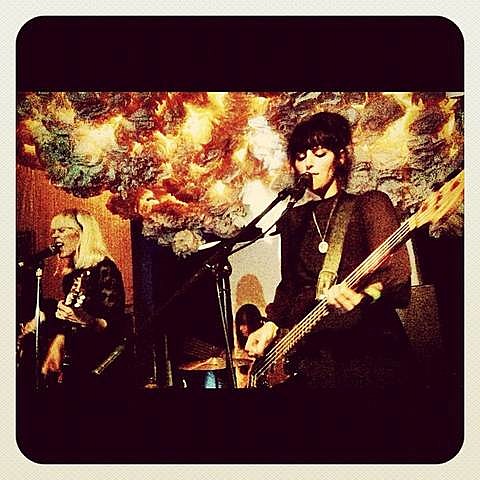 Dum Dum Girls took the stage about 12:30 and seemed in good spirits, delivering the kind of all-killer-no-filler showcase set that makes festival attendance a plus sometimes. They even did their cover of Pale Saints "Sight of You" again (just like at Europa). New bassist (and talented photographer/filmmaker) Malia James is a great addition to the band, adding a little sass to DDG's otherwise cool demeanor. (She also looks more than a little like Jessica Paré [aka Megan Draper].)

And that was it for me for that night, but BBG was just getting started with a late night WIERD show at Home Sweet Home that featured Cult of Youth and Slug Guts. But elsewhere in the world...

Hundred Waters, who you can see tonight at Brooklyn Bowl with Lee 'Scratch' Perry, and who play the free BrooklynVegan day party at Public Assembly Saturday, started their CMJ run at Mercury Lounge last night with Pitchfork on hand.

Pitchfork also stayed for Doldrums who you'll find at our Friday day party at Public Assembly.

We also got a peak at the renovated Slipper Room last night. BV's Dominick Mastrangelo stopped by for the Glassnote showcase set by Daughter (who open for the Walkmen and Dum Dum Girls at Terminal 5 tonight). "Very cool space. Look forward to catching more shows here", he tweeted. Stay tuned for more on that.

The few who stuck it out till the end at the 285 Kent hip hop show last night are probably tired, as we know Sasha Go Hard went on some time after 3am... she came straight from the airport too, and then went right back to the airport and back to Chicago right after the show!

Hopefully by now you're up at Rebel checking out a full lineup of Texas bands tonight, or maybe doing something else, and we hope to see you at our first day party Friday at Public Assembly!

Speaking of our day party Friday, you can see Sky Ferreira there. Last night she played Union Hall., Check out a video below...