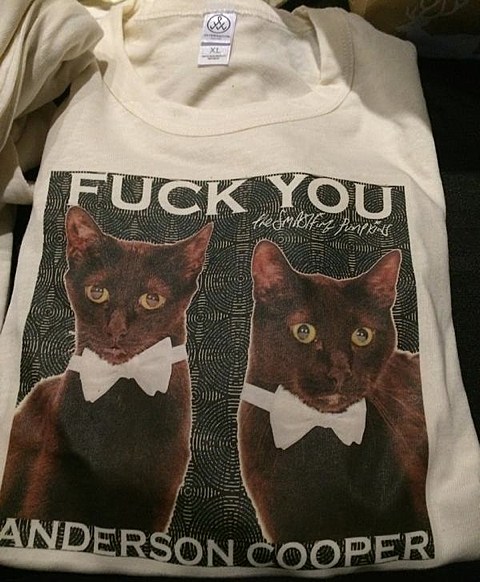 Yesterday, Rolling Stone posted their top albums of 2014, and their #1 pick -- U2's invasive Songs of Innocence -- pretty much became the laughing stock of music snob Twitter (not that we weren't guilty of that too). But who isn't a music snob these days?. Even CNN headlined "Huh? Rolling Stone says U2 has 2014's best album." The article says Rolling Stone is "often viewed as being less daring in its tastes than online rivals such as Pitchfork." That's old news, but I guess now we can add that it's less daring than CNN too?

And it's not the first time CNN have been music snobs this year. Anderson Cooper, presenter of CNN show Anderson Cooper 360, ridiculed Smashing Pumpkins frontman Billy Corgan for posing with cats on the cover of no-kill animal shelter PAWS Chicago's magazine. On his show, he said:

So perhaps Billy Corgan is I don't know, off his alternative rocker, but I think maybe there's more to this. Maybe he's being ironic, or maybe when the cool rock stars start doing less rock starry things, it kind of makes us face our own mortality. See I want R.E.M. to stay just the way I know and love them, I don't want 'Everybody Hurts' to suddenly be used in an Excedrin commercial. I don't ever want to see a product called Eddie Vedder's Prune Jam. I want to see neither Stephen Malkmus nor Thom Yorke on the cover of AARP Magazine.

In retaliation, the band sold shirts at their recent Chicago show that read "Fuck you Anderson Cooper" (pictured above). All proceeds from the shirts went to charity.

I wonder what Billy Corgan thinks of the new U2 album? He's openly a fan and has interviewed them. His own new Smashing Pumpkins album is out next week (12/9) and can be streamed in full now via iTunes Radio. Should Rolling Stone have waited for it to publish their year-end list? I mean they did put Foo Fighters and Weezer in the top 20.

Meanwhile, U2 and Rolling Stone's #2 pick Bruce Springsteen performed together in Times Square last night. You can watch a video of that (also including a set from Kanye West and more) below...