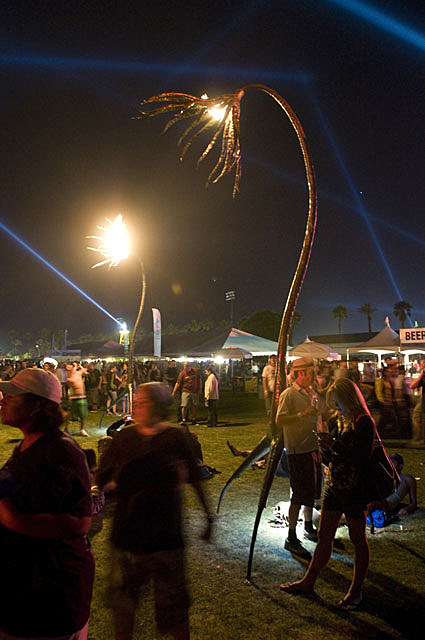 "It is the start of a new year and that means we're slouching towards Southern California's biggest music festivals, starting with Coachella in the middle of April. And the internet is simply ablaze with line-up rumors. But this year, much like last, crazed fans have taken things a step further on the festival's message board, going as far as to contact bands directly for confirmation.

At the forefront of this year's rumor mill are scores of potential summer blockbuster acts, including Animal Collective, Basement Jaxx, the Black Keys, Blur, Britney Spears, Four Tet, Glasvegas, José González, Keane, Morrissey, N.A.S.A, Neil Young, Outkast, the Pretenders, the Prodigy, the Replacements, the Smiths, the Thermals and the White Stripes. And among the purportedly confirmed artists, who have been reached through Myspace or other means, are some pretty sizable LA locals like No Age, Peanut Butter Wolf, the Airborne Toxic Event and Flying Lotus." [LAIST]

Speaking of the Airborne Toxic Event, they sold out their Bowery Ballroom show and added another one on March 8th (three days earlier). They also just so happen to be the band playing David Letterman tonight (1/12).

Fleet Foxes are another one of those listed as confirmed. They're also confirmed to play SNL next week.

Also confirmed are Los Campesinos! who are playing a show at Sound Fix Records this week.

All confirmed and rumored Coachella artists (according to LAist) below...