Complete with fireworks, pyrotechnics and special appearances Guns N’ Roses set was both vocally and instrumentally as well as visually. The introduction to the band seemed odd, even for them. It began with the Looney Tunes Theme Song and considering the things that would occur afterwords, the theme song was entirely fitting. The lights dimmed before Slash, in his signature hat and maniacal looking hair appeared on stage. The lights came up and Axl Rose sat on a throne beneath the spotlights that dangled from above. Yes, Axl was sitting. Was it part of the performance? No, Axl had recently broke his foot and like any good rock star, he doesn’t cancel, he powers through and plays the entirety of the show on a throne. It was not just any throne though, it was the same throne that Dave Grohl used last year when he had his leg injury and Axl paid tribute to him by thanking him for the chair. Despite the leg injury, this did not stop the band from rocking harder than if Axl was entirely healthy and free of broken bones. Instead, they channeled their energy into the music itself. -[Mxdwn]

Day 2 also had Grimes, who brought out Janelle Monae and Aristophanes and endorsed Bernie Sanders. More on that HERE.

The first weekend of Coachella wraps up today (Sunday, April 17) with Calvin Harris, Sia, Beach House, Anderson .Paak, Rancid, Kamasi Washington, Deafheaven, The 1975, and more. You can watch the livestream which starts at 3:30 PM Pacific (they're rebroadcasting highlights from Day 1 and 2 till then).

Pics from Coachella Day 1 are HERE. More of Day 2, below. 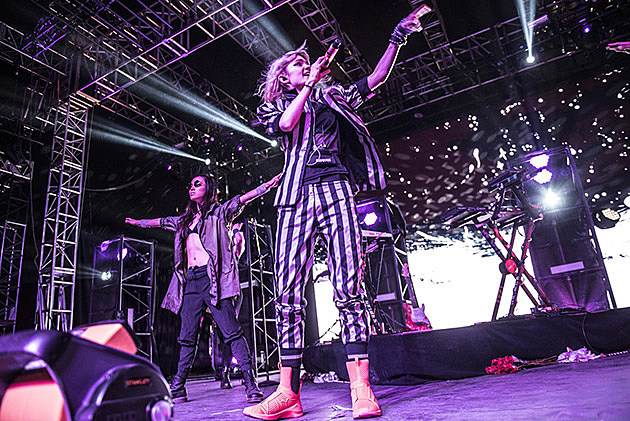 MORE IN THIS GALLERY: