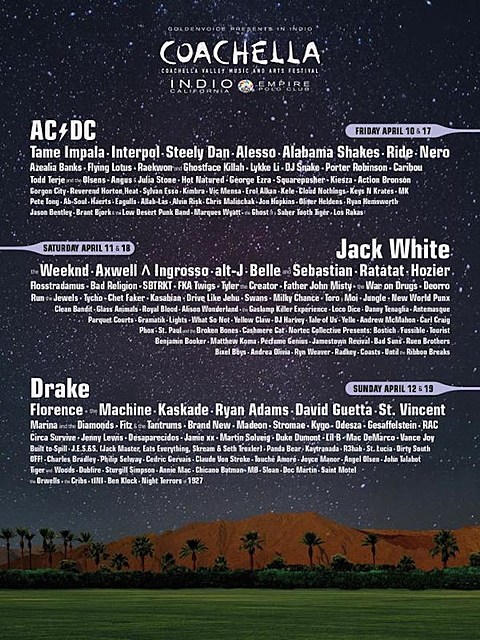 The first of two Coachella 2015 weekends is this weekend, and if you can't be there, SiriusXM will have subscribers covered with at least some of the sounds.

SiriusXM announced today that for the first time in the history of the event, Coachella will be broadcast live on radio.

"We are excited to work with the Coachella team on presenting the first ever live radio broadcast of the Coachella Valley Music and Arts Festival. With SiriusXM's nationwide reach via satellite and online, we are the perfect destination for music fans to hear all the great music and unforgettable moments that make up Coachella," said Steve Blatter, Senior Vice President and General Manager, Music Programming, SiriusXM.

SiriusXM's Coachella broadcast will air on Alt Nation channel 36 beginning Friday, April 10 at 2:00 pm ET. Select performances will also air on The Spectrum channel 28, SiriusXMU channel 35, BPM channel 51, Electric Area channel 52, and through the SiriusXM App on smartphones and other connected devices, as well as online at siriusxm.com.

Stay tuned for the schedule, which will be posted at siriusxm.com/Coachella2015.

Oh, and if you will be at the fest, don't forget to leave your selfie sticks at home.