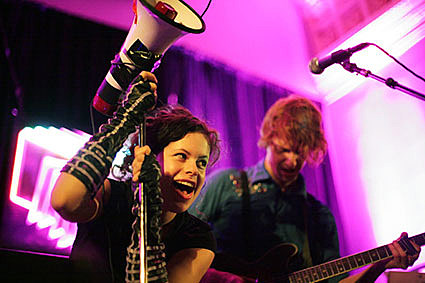 "The highly anticipated Coachella Valley Music and Arts Festival is sold out, festival officials announced today. "Less than three weeks after tickets went on sale the eighth Coachella Valley Music & Arts Festival has already sold out, according to promoter Goldenvoice. It’s a remarkably rapid sell-out for the annual festival, considering the all-inclusive price rose to $252 to account for a third day..." [OC Register]

Arcade Fire, who are also playing Coachella, played their 2nd of 5 shows in NYC last night. The bloggers at "Coachella 2007" wrote:

50 tickets were sold at the door for Arcade Fire's second sold-out show at Judson Memorial Church last night. We waited in line for two hours, envious of everyone that had been lucky enough to buy their tickets online or get on the guest list.

Aside from providing the audience with supplies of heart-shaped chocolates and sweets, frontman Win Butler also dedicated new track 'My Body Is A Cage' to his wife and fellow band member Regine Chassagne in honour of the occasion

ms. drew barrymore spent the night canoodling with spike jonze at the arcade fire show last night. andy samberg was also there--alas, sans box. if his promises to the band are true, they'll be playing on snl on the 24th (hosted by rainn wilson).

Did anyone go both nights?