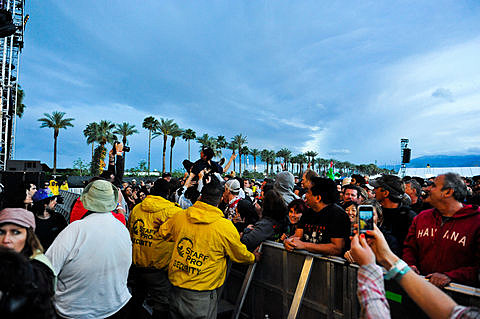 As mentioned earlier this week, Coachella were threatening to move their location out of Indio, CA due to a proposed tax from the city. That proposal has since been dropped. A letter on the city of Indio's website from Council Member Ascencion "Sam" Torres reads:

Indio, Calif., (July 5, 2012) - Today, Council Member Ascencion "Sam" Torres announced the decision to suspend activity on the proposed admission tax ballot initiative. Along with the committee, his efforts were based on the desire to generate additional revenue to support city services in these tough economic times.

According to Council Member Torres, "the potential for the music festivals to move out of the city exists, and if this should occur it would negatively impact the region; I cannot in good conscience allow this to happen no matter how dire the city's circumstances." Mr. Torres adds, "My sincere hope is that we can now move past this episode and I personally look forward to working to enhance relationships."

"I applaud Mr. Torres' decision and thank him for putting the city's long term prosperity first," said Indio Mayor, Glenn Miller. "We are committed to working with Goldenvoice to identify mutually beneficial solutions to ensure that the music festival economic engine stays in Indio and continues to boost the regional economy," continued Mayor Miller.

The music promoters commitment to Indio and the Coachella Valley have gone far beyond the music world as they support several important charitable, non-profit, civic, and arts organizations in the region. In addition, Goldenvoice has gradually become a major regional employer through its festivals for the months of March and April and their festivals have resulted in millions of dollars in revenue to support the local community.