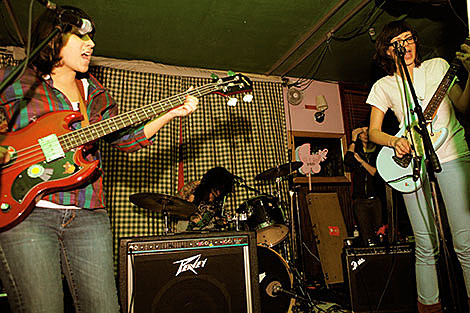 The Coathangers are going on tour this October with Japandroids (who will come to NYC on Sept. 24th with Mt. St. Helens Vietnam Band). But before those joined dates, The Coathangers will be in NYC for shows of their own on September 29th, when they play Death By Audio's The Maze, and September 30th, when they play Cake Shop. Also on the bill for the Cake Shop gig are DC shoegaze-inspired Prisms and BK's Ex-Humans. For the DBA gig, they'll be joined by '80s-style-punks Xray Eyeballs, a band called Swimmingcitiesoceanofblood (?) and Nervehunt, which features Justin from Teeth Mountain and Ryan Ulsh from Wavves. The gig will be Nervehunt's first show in a while (Flickr has a pic and a brief, blurry video of a show, apparently of them, at the Charleston last year).

Ryan Ulsh was the drummer of WAVVES that you might most remember from his appearance with Nathan at this year's Primavera Festival. Not surprisingly, things didn't work out between him and Nathan, and now the prolific Zach Hill (of Hella, etc.) is playing in WAVVES.

"Toomerhead," the opening, dance-punk-sounding track to the Coathangers' newest record, Scramble, which came out in April, is posted above. An interview with the band from last year and a clip of them live in Vancouver (with an incredibly strange and extended intro) are posted with all tour dates below...

THE COATHANGERS in vancouver BY VIDEOTHING.COM

The Llano Idea Interviews The Coathangers