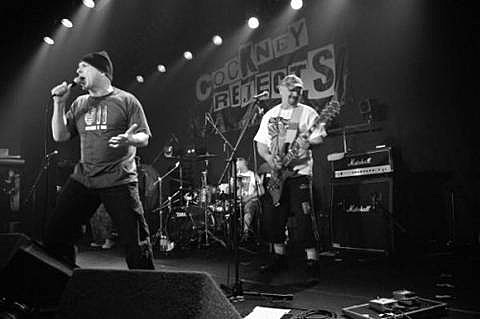 Late '70s UK Oi! originators Cockney Rejects and '80s LA punks Youth Brigade are teaming up for a North American tour this February. The tour hits NYC on February 22 at Music Hall of Williamsburg with long-running NYC punk band Murphy's Law and Long Island's The Templars. Tickets for the MHOW show go on AmEx presale today (10/31) at noon with a general on-sale starting Friday (11/2) at noon. All tour dates are listed below.

Speaking of long running punk bands, as mentioned, the Bouncing Souls are doing their annual holiday shows at The Stone Pony (which survived Hurricane Sandy) from December 26 to 29. Since we last spoke, the openers for those shows have been announced. On 12/26 it's Paint It Black, The Curse, and Go! for the Throat; on 12/27 it's Man Overboard, Trapped Under Ice, and Born Annoying; on 12/28 it's The Casualties, Grey Area, and Team Vibes; and on 12/29 it's Barstool Prophets, Forgetters (who also have a new album and a Brooklyn show on the way), Make Do and Mend, and Wet Witch. Tickets for those shows are on sale now.

A list of all Cockney Rejects/Youth Brigade tour dates, the tour flyer, and some videos below.