Frankie & The Outs at Coco66 during CMJ (more by Andrew St. Clair) 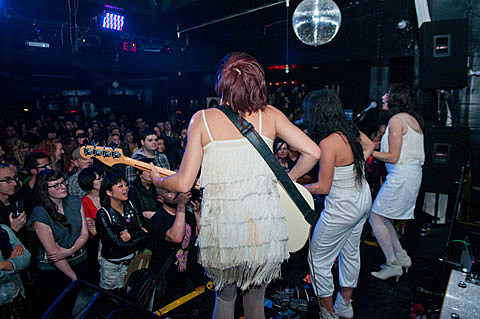 Coco66 is up to full strength again after their CMJ-week debacle at the Tamaryn/Glasser/Frankie & The Outs/Light Asylum not-CMJ show. Open since Tuesday, this Friday (11/19) will see the venue host its first actual show with Burnt Sugar, MK Groove Orchestra, and Dope Sagittarius.

Sadly, in news I learned while searching for information on the venue's re-opening, that late Friday night show at Coco66 ended even worse than previously realized. A pair of cyclists leaving the show suffered massive injuries from a hit-and-run driver near Franklin & Calyer in Greenpoint (just a few blocks from the venue). Light Asylum goes into further detail"

"everyone who went to our Coco66 show that got busted by the police. Soon after, two of the attendees were heading home by bike and were hit by a car, traveling southbound on Franklin near Calyer. One of them was dragged 30 feet by the car, who did not even stop. She is still in the hospital."

Police are currently on the hunt for the perpetrators (maybe), but, like the MTA signs say, "if you see something, say something". Friends of the victims have set up an email tipline (FRANKLINSTREETBIKEACCIDENT@GMAIL.COM).

A picture of the (gruesome) flyer, which you might recognize from it being posted around the Northside, is below... 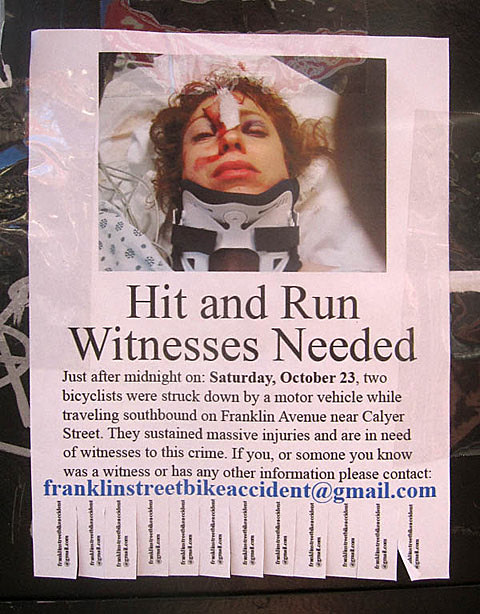