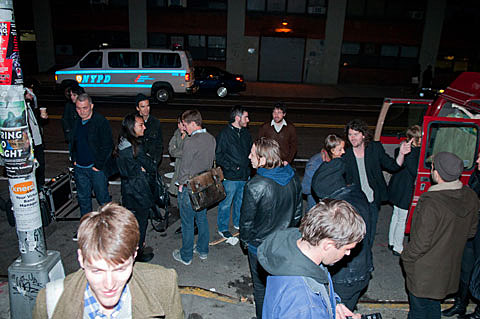 As mentioned, Coco66 was shut down on July 9 so SBTRKT couldn't DJ after his PS1 show. We also recently mentioned that the July 23rd Pictureplane, Teengirl Fantasy, Gatekeeper show originally scheduled at Coco66 has been moved to 285 Kent. That's because Coco66 never reopened after the SBTRKT incident...

It seems that Greenpoint music venue and bar Coco66 was raided by both the NYPD and SLA for operating without a liquor license last weekend. According to reports at Paper and New York Shitty, the authorities showed up at some point Saturday night and arrested the venue's owner David Kelleran and in a scene out of prohibition, all of the booze was destroyed by the SLA when they made the bartenders pour out every last drop of about $20,000 worth of alcohol. What a waste! The bar's problems began in October, 2010 when the NYPD conducted an initial raid and lost its liquor license. Kelleran had been buying booze at retail shops for the bar's events and apparently wants to try to reopen the bar without a liquor license. [Eater]

No events are currently scheduled at Coco66.