"RIP @CodieRavioli. Such a powerful and inspiring life." - Michael Cavadias

"Made a toast to @CodieRavioli with @garbo2000 & @DarianDarling tonight! We miss you Codie xx" - Miss Guy

"Heaven has a new Queen!!!? R I P my sweet friend. I will never forget all the trouble you and I would get into at Boy Bar!" - Chi Chi LaRue

"RIP TO AN AMAZING HUMAN BEING AND BEAUTIFUL SOUL..@CodieRavioli WE LOVE YOU. XOXO" - Patricia Field 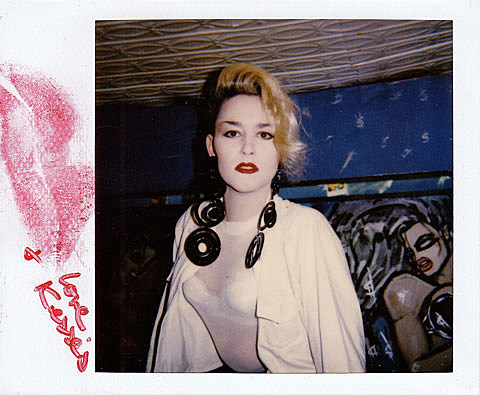 "The sudden passing of the legendary Codie Leone, aka Codie Ravioli, has downtown reeling. A heart attack while out for a walk did her in. She was an icon, an inspiration, who always had a kind word or something delightfully snarky to say. Maybe best known for her career with Patricia Fields" [Steven Lewis]

Codie Leone was a prominent figure in the transgender community of NYC for the past few decades. An influential hair stylist and makeup artist, Leone was also an integral presence in the New York club scene. After living in Las Vegas for a time, Leone moved back to New York and gained status as an important stylist; working at the famous Patricia Field Salon... [GLAAD]

Codie is featured, along with many other prominent NYC club kids and drag queens, is featured in a new Pat Fields documentary entitled "The Little House That Could". The trailer for that is below...

---
the little house that could (official trailer)

Above photo by Tom Eubanks.