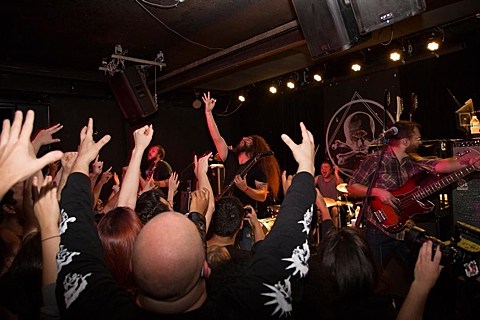 Like many bands in the surrounding NYC-area (or even from further away than that), Nyack proggers Coheed & Cambria recently made a move to Brooklyn. Frontman Claudio Sanchez and his wife settled into an apartment in Park Slope, and he tells Team Rock that dealing with the new setting is what caused their new album The Color Before the Sun to be the band's first non-concept album:

One of the places we found ourselves was in an apartment in Park Slope, Brooklyn. And coming from a country house in upstate New York, I kind of fell out of my comfort zone. I like to wake up very early, usually around five o'clock in the morning, as that's when I tend to be at my most creative.

In a country situation, in a house of our own out there in the woods, I can do that whenever I want. But in an apartment it just doesn't work out that way, and I found myself writing these songs later in the day when my neighbours were home. And I knew they could hear me because I could certainly hear them. So this sense of exposure started to leak into the execution of both the music and the lyrics.

I ended up thinking I had some sort of writer's block, because none of these songs fit into the formula that I was accustomed to with Coheed. For a second I almost thought of this record as a solo album, because I couldn't see a concept around it and a lot of things were happening in my life.

In that same interview, he mentions how the first song on the album, "Island," is centered on his new hometown:

"Island" is very much the beginning of the record. It opens with the sound of the Q Train going into Brooklyn, and that's the train that I would frequent when going in and out of Brooklyn into Manhattan. It's very much the beginning of my identity crisis when writing this record, too. I had a hard time writing songs in this new apartment - or at least I thought I did. And it's basically a song to my wife, saying that she needed to hear me and understand that it wasn't working for me. I needed to leave and get back to the country, and that's essentially what "Island" is about - just the apartment being too small, and the exposure being too much for me. When I started the song it was all on acoustic, and that was the beginning of this idea of the album being a solo effort. But we transformed it into a rocker, and the guitar at the beginning claws into the idea of distance and landscape, which I really didn't have being in that apartment. I was longing for space, and the opening guitar line is supposed to resonate that. Then the band comes in, and everything becomes tight and crunchy. Again, that's meant to be a musical representation of the chaos I was experiencing inside the space of that apartment.

Some of the first people to hear the song were actually a group of Park Slope kindergarteners. Before the record was out, Claudio performed the song on a sidewalk for the children earlier this month.

That song now has a music video, and true to its theme, it was filmed inside two different Park Slope subway stations (the 7th Ave station and Grand Army Plaza). That video premieres in this post. You can watch it below.

Update: They're playing the Theater at MSG with Glassjaw and Silver Snakes.