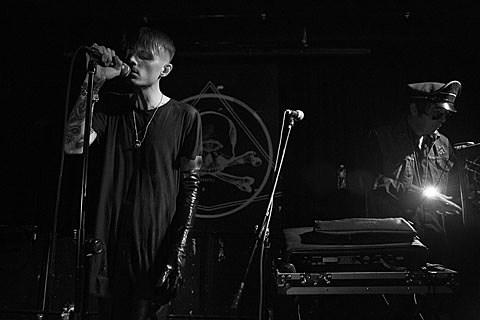 As you may have heard, Cold Cave's tour with Boyd Rice, which has been riddled with cancellations due to Rice's inclusion, hits 285 Kent on Saturday (6/29). The Brooklyn show is still happening, however Todd P has issued a statement about it:

As you may have heard, the There has been a small uproar about Boyd Rice joining Cold Cave's show at 285 Kent this Saturday. After a handful of venues in other cities canceled tour dates due to Rice's inclusion, and notices appeared on a couple of websites, we've received about 9 emails imploring us to cancel, as well as 3 recommending we do not cancel. There has been some additional chatter on Twitter and Tumblr, etc.

Boyd Rice recently reappeared after many years absence, and has performed on bills this year at Europa and at Saint Vitus, without incident or protest. The controversy has come up because Boyd Rice is a character who has spent the last 30 or so years saying truly disgusting things - everything from palling around with the KKK to wearing Nazi uniforms to advocating the subjugation of women and the efficacy of rape. The guy revels in offensiveness and whether or not his statements are meant sincerely, or as schtick - he completely sucks as a human being and as an artist he employs abuse imagery and hate rhetoric for shock - a practice we find despicable.

So that leaves the question - why is this asshole playing 285 Kent (which I help run with Ric Leichtung)?

The rest of Todd P's statement is below...

Well, Ric booked Cold Cave to perform - a popular cold wave pop band. The show sold out with only Cold Cave's listing, after which time Cold Cave's frontman - Wes Eisold - announced he was adding Boyd Rice as his opener for Cold Cave's entire tour. We were left with a show booking that now included a noxious character.

We find Boyd Rice reprehensible and would never curate him or any of his acts to perform. However, he was booked and that is that. We believe passionately in free speech and artistic license (in this case Cold Cave's) and we will not actively censor someone else's curation. We also believe that Boyd Rice's notoriety would only be increased by martyring him in a high profile show cancellation.

We've heard a lot of concerns that allowing this man to take the stage will "endanger" the community or will "endorse" what the guy says. We couldn't disagree more. First of all, this guy is a washed up 80's era troll. He poses no realistic threat to our community. Attempts to puff his rhetoric up into "danger" are laughable - this guy is a joke. We have straightforwardly said we abhor what he has to say. We are far more concerned about the message sent by censorship than whatever this washed up relic gets out of our allowing him to perform.

On a more philosophical level, speech is speech and action is action. We live in a free society and while artistic license and free speech are different things, they both speak to the belief system that anyone can say anything in the public forum and "right" ideas will win out over those that are evil.

Passions have run high among some, and it is altogether possible that there could be an attempt at direct action to "sabotage" the event on Saturday - there has been some conjecture that this fear contributed to the cancellations in other cities. We have already received multiple oblique threats, several curse-laden late night crank calls, anonymous threatening text messages, etc. These sort of thug tactics only strengthen our resolve, however. We will not be bullied, and frankly we wish this same level of passion was instead directed at undoing the fascistic NSA's surveillance structure recently revealed to be infiltrating all of our lives, rather than freaking out over a pathetic old hack saying bullshit that is designed to offend.

We encourage anyone who wishes to attend the show but does not wish to watch Boyd Rice to leave the room when Boyd Rice performs. We will issue refunds to anyone at the door who purchased a ticket but has now chosen to skip the show (and we won't be releasing new tickets to replace those that are refunded).

For what it's worth, we will be challenging Boyd Rice's views on site, night of show, by distributing literature at tables set up in the lobby, explaining who Boyd Rice is and what his shameful history entails, as well as information about how to get involved in anti-fascist activism, support for the victims of domestic abuse and sexual assault, and the cause of freedom of expression.

We at 285 Kent don't expect this decision or explanation to fully please those individuals who wanted us to cancel. We respect your views, even if we disagree about tactics, and we hope you can extend us the same respect.