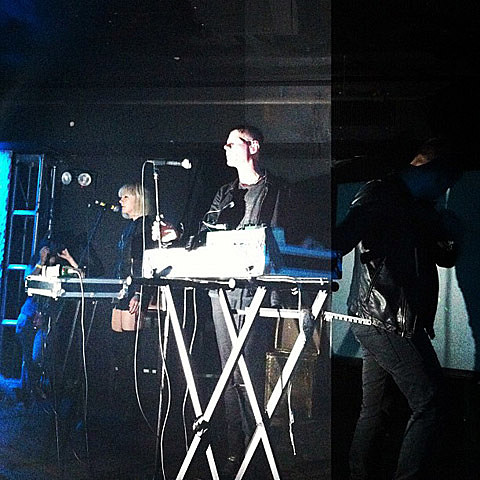 Last night (6/14) was unofficial goth night at Europa in Brooklyn.

The latter kicked off the show on a dissonant note, barraging the few blasé (and mostly seated) attendees with violin feedback and isolated electronic noise. Though discordant, Yeh's set most certainly lent itself to the "goth prom" ambiance of the event: he performed off and to the right of the stage, set up on a rickety table and backlit with color-changing LED lights. (Naturally, Europa's velveteen, hyper-polished and chandelier-encrusted décor helped, too.)

The night's dance vibes -- and, perhaps not surprisingly, the crowd -- picked up significantly when White Ring took the stage. That is to say, it didn't pick up too much but just enough for people to hang their heads and sway under strobe light. The songs were slow but pulsating; paired with singer Kendra Malia's strident vocal delivery, the performance came across as visceral, yet cold  -- think Crystal Castles with a heavy dose of codeine syrup -- and eased the crowd perfectly into the headlining set.

When Cold Cave came on, mood seemed to switch gears to beach party spillover, with the sea of black shifting back and allowing a bare-legged, sun-kissed crew of what some might refer to as "normies" to the front. They greeted the band with exuberance and -- gasp! --  up-tempo dancing. Cold Cave returned the favor by playing the hits off Cherish the Light Years while also peppering in some old favorites including the single "Love Comes Close" and b-side "Theme from Tomorrowland", featuring Dee Dee from Dum Dum Girls on vocals. At one point, they went even further back into the band's repertoire to play a Cremations-era mash up of "Poison Berries" and "Pacing Around the Church", much to the chagrin of the dance-oriented crowd.

Saccharine sweet at times and flat-out scary at others (see: Dominick Fernow dancing maniacally around the stage, pointing, and shouting angrily at the crowd), Cold Cave's performance was as dichotomous as the night's line-up. Though the marriage of Eisold and Fernow's hardcore and noise roots with the dance-friendly sensibility of Cold Cave works well for the band, it sometimes fails to translate live, especially when mixing performers as far-removed from each other as these two openers were. But, so long as you can approach the performances with little expectation of seeing "dance-friendly band" or "the members of American Nightmare and Prurient project" and simply go to see Cold Cave, the band (a novel idea, I know), they shouldn't, and won't, disappoint.