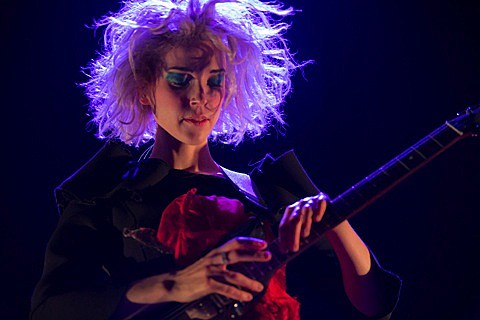 Saturday Night Live has announced the hosts and music performers of the last three shows of the season. On May 3, a couple days before their sold-out Beacon Theatre performance, Coldplay will play SNL with host The Amazing Spider-Man 2 star Andrew Garfield.

Then on May 10 the musical guest will be Black Keys, whose new album Turn Blue will be out three days later. Charlize Theron, who is starring in Seth McFarlane's new comedy, A Million Ways to Die in the West, will host.

St. Vincent, last seen singing "Lithium" and "About a Girl" with the remains of Nirvana at Saint Vitus, will be the musical guest on the season finale which will air on May 17, and is hosted by SNL alum Andy Samberg. Annie Clark is no stranger to comedy, having appeared on a few episodes of Portlandia, so maybe she'll turn up in a sketch.