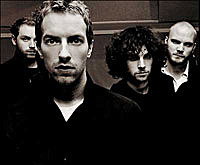 KEEPING UP WITH THE RADIOHEADS

"What Radiohead did [releasing the album In Rainbows as a pay-what-you-like download] was great. They had that freedom because they were out of contract. We didn't. I know being on a major label is meant to be antiquated, but we're fine with it. We're trying to keep pace with the idea of free content, though. We gave away [the album's first single] "Violet Hill" with NME and as a free download.

"Next month we're doing free concerts in London, New York and Barcelona. And on the album, tracks five and six are two songs but show up as one, so you can download two songs for the price of one. That was inspired by the 'buy one get one free' promotions at KwikSave, where I once worked."

"I always thought that if you were a 16-year-old and liked Coldplay you'd keep it quiet. We aren't cool and never will be. But I hope after this album, 16-year-olds will feel proud to like Coldplay. The best gig I've ever been to was by John Williams, who wrote the music for Jaws and Star Wars. I also love Stevie Wonder and Christy Moore. Are they cool? The best bands in the world today are probably Arcade Fire and Sigur Rós. I think Coldplay is only the seventh best in the world." [Brian Boyd talks to Coldplay's Chris Martin]