Coldplay at Barclays Center in 2012 (more by Dana (distortion) Yavin) 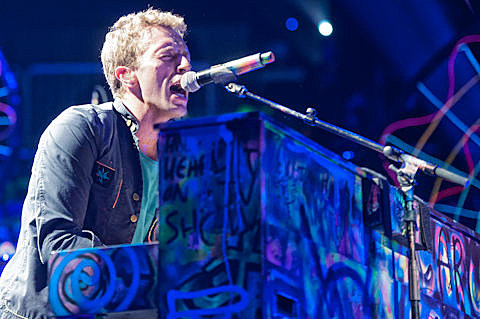 Coldplay recently announced some shows, including a NYC stop happening on May 5 at Beacon Theatre which went on sale this week and sold out instantly. They've since added another show happening at the same venue earlier that night (5 PM), which is being presented by Citi. Tickets go on sale Wednesday (4/30) at 10 AM and are available to Citi Cardmembers only. Since we last spoke, SZA (who just released Z which you can stream below) was added as an opener to the late show. Updated dates are listed below.

Coldplay will also appear on SNL on May 3, and in other Coldplay/TV news, they'll air an hour-long special, Coldplay: Ghost Stories, on Sunday, May 18 (7 PM) on NBC. The special was directed by Coldplay Live 2012 director Paul Dugdale, and blends live footage of the band performing material off their new Ghost Stories album (recorded in front of an 800-person audience in LA in March) with cinematic film. You can watch the trailer for that below.