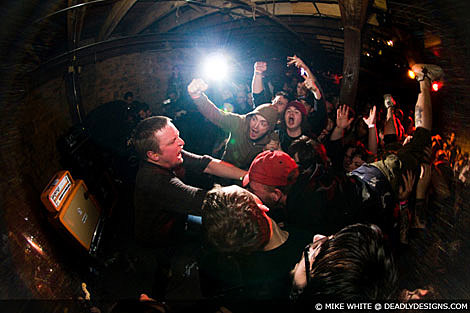 There are a few show-related regrets that I have this year so far..... missing Destroyer 666 at Europa. Absu at BB Kings. Kreig and Woe at Public Assembly. But one of the biggest regrets that I had was not getting to actually SEE Coalesce at Scion Rock Fest. Luckily, redemption is on my side, as we are beyond pleased to announce that BrooklynVegan will sponsor Coalesce at Club Europa on Dec 30th! The show will be the their ONLY Northeastern appearance. More details are to come, including support, but for now, you can get your tickets here.

Coalesce has lined up a few sparse dates so far including Fun Fun Fun Fest, The Fest 8 (which recently announced set times), and a pair of FREE shows with Cave In that jump off this week. Cave In aren't playing for free in NYC, but they are playing with Narrows and Trap Them at Knitting Factory on 11/19. Tickets are on sale.

Coalesce released their critically acclaimed OX LP earlier this year, and are following it up with the OX EP, due on 11/10. Preorder it here. The band is also offering the chance for fans to try their hand at remixing the track "Wild Ox Moan".