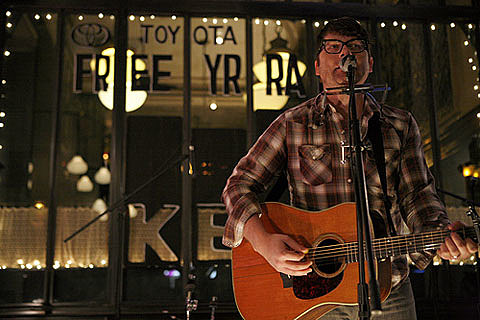 "Like his performances with the Decemberists, Colin solo is fragile and intimate, accompanied by just his guitar and harmonica. From the brand new "Rise to Me," a beautiful ode that will bring tears to your eyes, to the epic story of "The Crane Wife," in three parts, he captures those heartfelt emotions that remind you why you first fell for his voice and music.

And KEXP congratulates Colin's wife, Carson Ellis, on her award this week from The Society of Illustrators for her book Dillweed's Revenge.

Live at the Ace Hotel NYC, as part of KEXP's broadcast, sponsored by Toyota's Free Yr Radio, Colin played a stripped down set of three new songs and the "Crane Wife" saga." [KEXP]

YouTube videos of all four songs he played, below...

Colin Meloy, new Decemberists track: "Down by the Water"