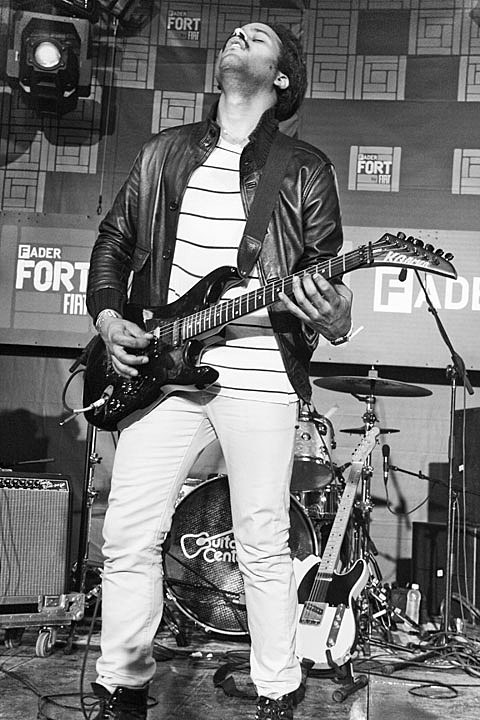 A crowded backyard tent filled with cigarette smoke, free open-faced tacos (pork, chicken, brisket or veggie), a man carting a dolly of Lone Star cases through the crowd, and a pair of middle-aged guys picking a fight with each other on a Wednesday afternoon. "Doesn't he know I'm a ticking time bomb?" the offended guy says, a bit like he's not joking. JEFF the Brotherhood is playing too, which is more or less the occasion for all of this, my first show of SXSW 2011. The JEFF brothers aren't really the focus though, since they'll be playing a dozen other times this week, and most of the people are concentrating on the tacos, their conversations or their inability to get away from the door of the totally (did I say?) packed room.

In spite of that, the band is tearing through songs from Heavy Days and their new LP We Are the Champions, and between songs tossing out free vinyl singles into the crowd: "Those are going to slice someone's neck open," says Jake before slinging a few more across the room. They go into "Bummer," a ballady, Dino Jr.-style headbanger, that's one of the standout new tunes. 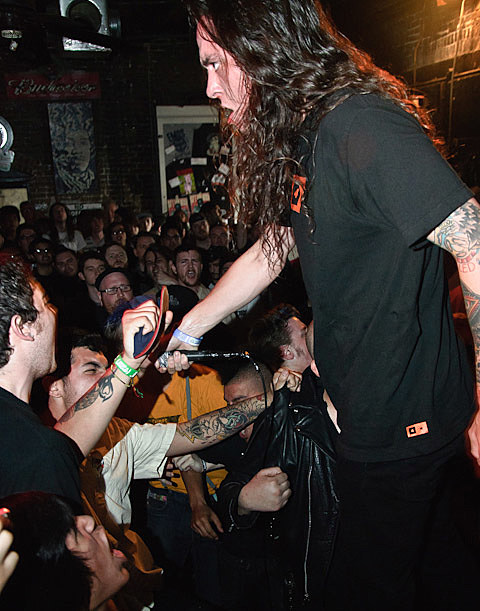 Ty Segall's entertaining and totally worthwhile band is up next, but the BrookylnVegan day show at Emo's is also currently happening, the highlight of which has to be the simulatneous staging of Cali punks Trash Talk (who went on before Kylesa) and Mister Heavenly (who went on before Surfer Blood). Mister Heavenly are a supergroup of-sorts you've heard about. On the inside, Trash Talk frontman Lee Spielman towers over everyone with the body of a scarecrow and a scary-as-hell perma-scowl; he smashes his forehead with the microphone a few times to draw blood. "Stick around for Surfer Blood," he says, before crawling into the crowd and standing on what I can only hope were someone's shoulders. People start edging toward the door. On the outside stage, Mr. Heavenly performs an appropriately lovely set, its two frontmen trading verses in their own styles.

After that, the Fader Fort brought Twin Shadow on stage, the bedroom-pop project of George Lewis Jr. that's become a wildly good live band. For an outdoor venue, the system sounded impressively balanced and clear - which would turn out to be a rarity at the festival. That was 'specially good for Yelawolf, whose songs sounded vital in a way that your iPod just can't do. With no crew to speak of, his solo athletics put in an early bid for best-of. 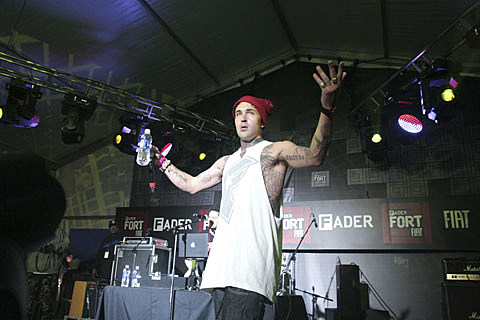 Later that night at Stubb's, Yuck and James Blake played what would be the first of several for both. Both did well on the big stage, a portent of things to come, vibing out in their respective styles: fuzz rock and chilled-out pop. Check out both of their sets for yourself at NPR- Blake and Yuck. 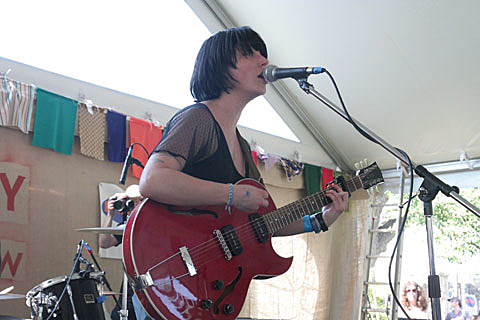 One of the first sets of the day at the BrooklynVegan Day Party at Barbarella and Swan Dive was an early afternoon session with Hunx and his Punx, whose singer seemed pretty annoyed about the five-show day ahead of him. "Come see the last one," suggested Hunx, saving the goods for that final push. The Punx band showed off admirable chops though, with the drummer pounding away and girl-group-style backups by the bassist. They went on after Shannon & the Clams who I missed but would see later in the week (Hunx and Shannon share members).

Out at the venue's back stage, Dominique Unique Young had a two-man band providing soulful hooks for her club bangers, which were just fine in the brutal sunlight. And then at Swan Dive, Rural Alberta Advantage made a push for anyone, like me, who hasn't checked out their new disc, Departing, yet to do so soon (live, drummer Paul Banwat easily does the work of two guys).

The French Legation Museum, a picturesque wedding spot (reserve early), served as a venue for the Other Music/Dig For Fire Showcase. Twin Shadow stopped by for a set, not quite of the same caliber as the previous one, before heading to Auditorium Shores to open up for the Strokes.

At the venue's smaller stage Janka Nabay provided some mellow entertainment before Sharon Van Etten slayed the main stage. As always, Sharon's effortless voice was the main attraction. Of her band, she said: "This is our first South By, and they are teaching me to rock out." And then on the last song, without any help, she closed with a vocals-only version of "Love More."

In the back of Barbarella again, the entire Odd Future crew (the ones who were in Austin anyway) arrived at the BrooklynVegan party to excited murmurs and cell phone pics, and the dudes seemed to take the fanboy-ish response in stride. It was a Mellowhype set, so Tyler only stepped in for a few verses, yielding center stage to the competent HodgyBeats and Left Brain. Multiple members, including Tyler, stage dove and Earl (who needs freeing) fronted one song via CD. 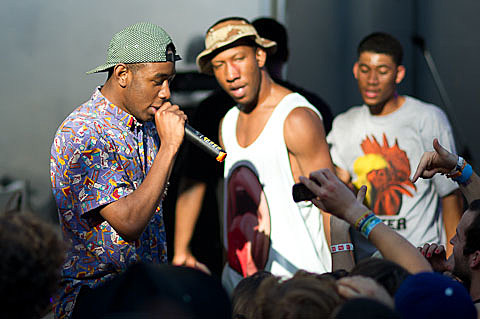 The scuzzy interior aesthetic of Jackalope seemed custom-built for Personal and the Pizzas, who played on a wedge-shaped stage surrounded by velvet portraits of bare-chested women. "Do you mooks want a rocker or a ballad?" says Personal, as the bassist swigs from a pitcher of beer. The rockers like "Brass Knuckles" and "I Can Read" slayed with Ramones-like simplicity.

At the Panache booking showcase I caught mostly bands I'd seen before (Heavy Cream, sporting a new drummer; Thee Oh Sees, who provided closing rites) mixed with some I hadn't (Bare Wires and their Stooges-esqe punk, and Slim Cessna's Auto Club, who staged a gospel-punk revival). 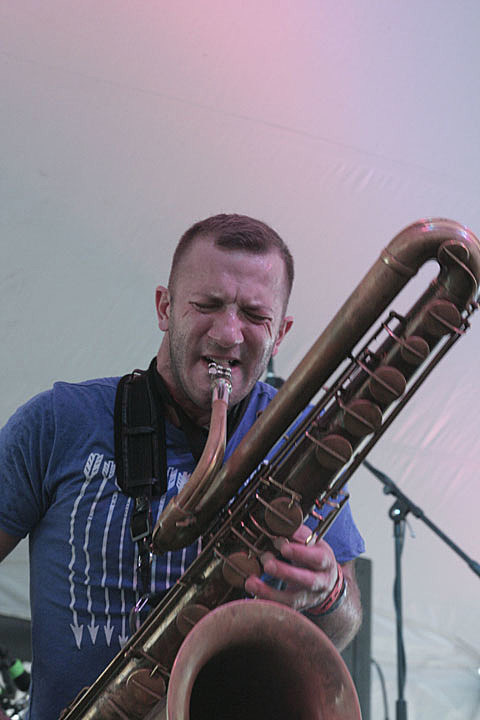 Cloud Nothings opened up the Pitchfork Offline Festival's desert-like main stage at the East Side Drive In. The cooler, still dusty tent next door provided a shadier atmosphere for Menoryhouse's dreamlike songs. That's also where Colin Stetson set up. Alternating between his huge bass sax and an alto, the Colin smothered his sound in grimy specks of noise, all coming from somewhere in his body. On one song he beatboxed next to the mic, maintaining his looping figures at the same time. On another he hummed a melody that crackled through, like an old 78, underneath the sax notes (check out another of Colin's SXSW sets , recorded by NPR).

At the French Legation Museum again, John Vanderslice played some new songs and threw in his great "Trance Manual" as well, Grass Widow twisted vocals and licks into a gratifying knot, Ghost of a Saber Tooth Tiger and Cults both sounded a bit off on their stages' sagging sound systems, which were really ruining the afternoon, until James Blake got on stage and made it all sound better. Say what you want about hype, but James and band came well-rehearsed. From the on-point dub break-downs that interrupted Feist's "Limit to Your Love" and his own "The Wilhelm Scream," you wouldn't have guessed it their first US trip. 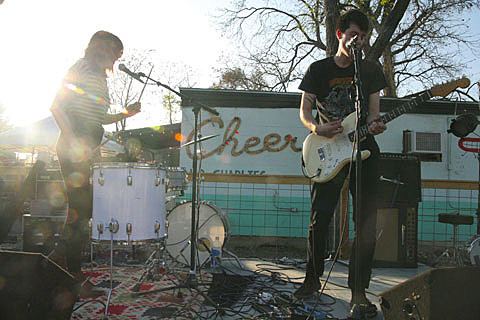 Shannon & The Clams at Cheer Up Charlie's 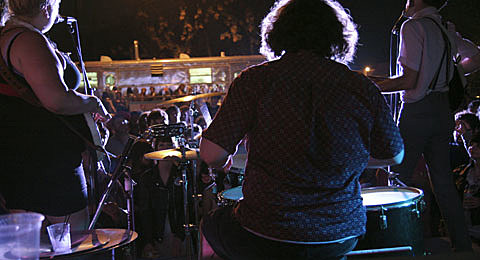 Playing an afternoon set at Cheer Up Charlie's was Reading Rainbow, a Philly boy-girl two-piece that specializes in harmonized pop; their tune "Wasting Time" would be good to cue up for a summer soundtrack.

Later that night at the same spot, Shannon and the Clams, whose namesake is Hunx's bass player and back-up singer, were abruptly cut-off after someone pulled the plug on the stage sound. To charge their cell phone. Power was shortly restored and the offender ridiculed. Out back Kimya Dawson played the K Records stage to a rapt crowd. I caught a song about gobbling farts and another about how caffeine, alcohol, etc. steal nutrients from your body. That juxtaposed with the garage-punk happening on the other side of the building: Davilla 666, who had an unruly stage presence that saw plenty of gang vocals and cups flying through the air, and King Tuff, closing out the night with a short set. 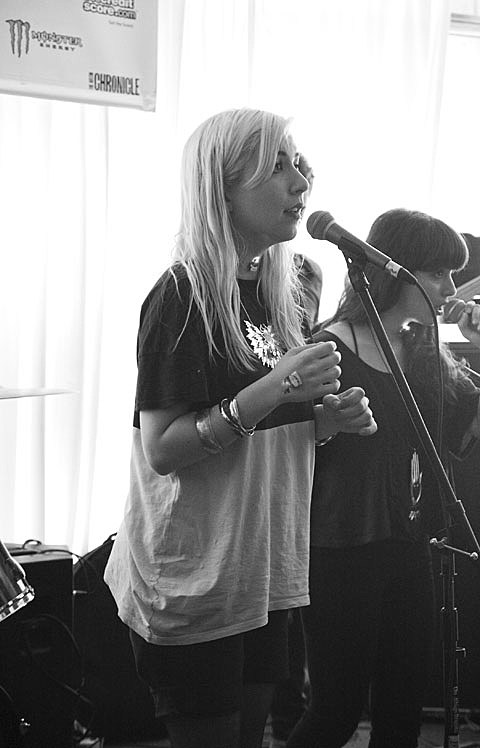 Katie Stelmanis brought her new band Austra to their first SXSW. In addition to the instrumentalists, Katie recruited a pair of dark-haired twins to dance and sing ethereal harmonies. The new tunes I heard at the BrooklynVegan party at Swan Dive keep the operatic flair of her past work, with a more baleric edge. "Lose it" and "Beat and the Pulse" both stand-out singles.

So Odd Future. The group gave everyone a chance at a glimpse with a bunch of shows. At the MWTX Fest the crew headlined, putting on an energetic, unpredictable set. At the last minute, organizers moved the gig to the spot's larger stage. Most memorably, Tyler punctuated the whole thing by climbing to the top of the stage's considerable speaker stack--let's say 25-30 feet up--and jumped off into the crowd below. At the very least, the many tour stops assured that the chorus to "Sandwitches" echoed huge throughout the city, "Wolf Gang Wolf Gang," heard from across the highway.

On the topic of stage dives, Jamin from JEFF spent some time in the crowd during the band's set at Mohawk, which reaffirmed the tightness of the new songs, and their ability to crank shit up, despite the fatigue. 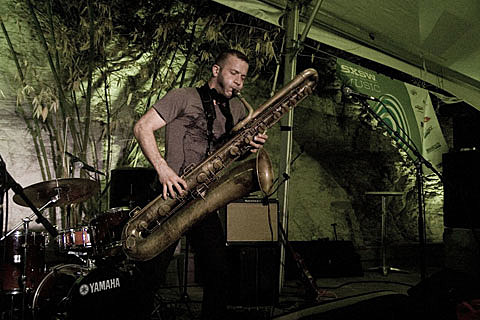 Colin Stetson was so good I saw him twice.

By the time late Saturday night came, heavy fatigue was setting in, even if you were one of the few who got into Kanye's three-hour, guest-filled (Justin Vernon, Jay-Z, etc) 1am show or rioting with DFA 1979. For me the final stop was the Vice-hosted show at Starr Building, which looked kind of like the empty showroom of an auto dealer. The whole thing reminded me of the cast party scene at the end of Altman's Nashville: the faces you'd seen throughout the week off duty and having a beer. As for bands, I missed Thee Oh Sees, but caught Keith Morris and OFF!, who were really fun despite not getting paid much attention except from a dedicated few. Odd Future came out for their last set of the festival, a few songs, Tyler's voice at this point a gravely croak that indicated the general exhaustion.