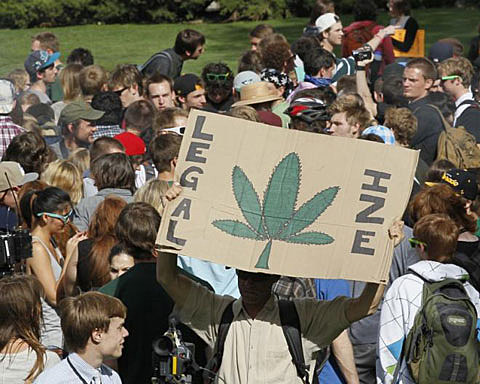 Colorado's Amendment 64, which will regulate marijuana like alcohol and remove civil and criminal penalties for adult possession of up to an ounce of marijuana, has passed.

Colorado is the first state to legalize marijuana.

Amendment 64 will also allow adults to grow their own cannabis - up to six plants in an enclosed space.

Wow! And Washington sort of legalizes it! Seattlepi says:

Washington voters on Tuesday passed Initiative 502 to legalize, regulate and tax sales of small amounts of marijuana to adults, a measure that flies in the face of federal law and policy that still treats possession of cannabis as a crime.

A similar measure in Colorado was ahead, and Massachusetts became the 18th state to approve use of marijuana for medicinal purposes.

Washington, by its vote, became a national pacesetter in the drive to reform drug laws. The reform effort was led by former federal prosecutors, the Seattle City Attorney and an ex-top FBI agent -- all former warrior in the 40-year "War on Drugs."

As that article also points out, Massachusetts now accepts medical marijuana! Maybe Romney can get a prescription to deal with his defeat tonight by Barack Obama.

Oregon also has weed on the ballot, but Measure 80 didn't pass there.