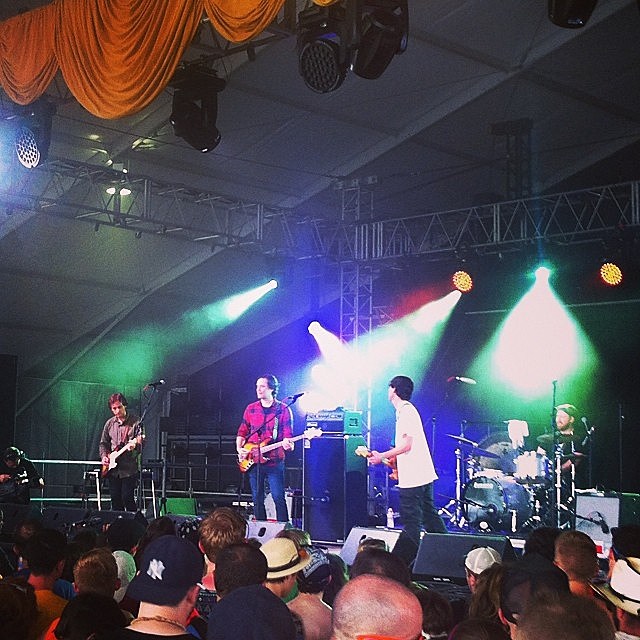 (Like Yoko Ono,) Cass McCombs loves to play small, secret, private shows around town. You can't blame him. He needs to still be able to headline 600+ capacity venues like Music Hall of Williamsburg, but sometimes wants to practice in front of a smaller audience. That's what Cass did at the now defunct Bar 4 at least twice in the past, and what he did with bandmate Joe Russo a week ago at Hometown BBQ in Red Hook to get ready for Bonnaroo. Check out two Instagram videos from the secret Brooklyn show where I'm told he played to "about 20 people", below. You can watch a video from Cass's 5/22 Music Hall show, down there too.

American Songwriter was at the actual Bonnaroo performance and writes:

Cass McCombs has a secret weapon on tour with him, Joe Russo. If you know that name I could probably just quit writing right now and you'd get the picture. But for those not familiar with the former Benevento-Russo Duo drummer (who plays with everyone from Furthur to Morning Teleportation in his spare time), he is one of the most accomplished and entertaining drummers in music today. Russo has his hands in so many cookie jars, it's hard to say how many times he's played the farm, but he's certainly no stranger. He filled the tall shoes of John Bonham at last year's Bonnaroo with his Zeppelin cover band, Bustle In Your Hedgerow.

Which isn't to take anything away from McCombs. If any complaint can be made about Russo it's that he's... distracting. But it's hard to distract from the great material that made up Cass McCombs' set.

Embracing his jammier side, McCombs lead his band through several breezy, grooving tracks. But the band knew when to pick up the energy, and fan favorites like "County Line" were the highlight of this set.

Cass's full band is Joe Russo on drums, Dan Iead on guitar/pedal steel, Jon Shaw on bass, and Will Canzoneri on keys.

Cass will not have a band with him at all when he becomes the DJ for the Starred show at Baby's All Right tonight (6/20).

California can catch Cass live when he opens for the War on Drugs at the Glass House (10/1) and Fonda Theatre (10/3).