Come at TT Bear's in September 2010 (photo by lumpBoston) 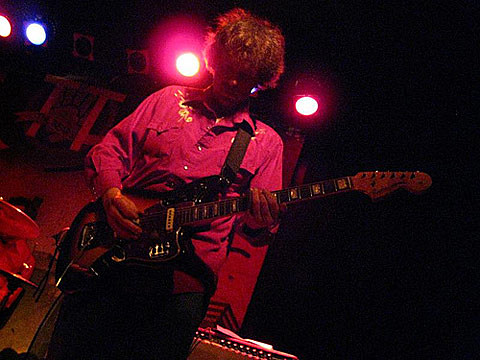 Come eased into the gleaming gun-metal-colored chords of "Submerge,'' from the band's '92 bracing full-length debut, "Eleven: Eleven,'' and we were off.

They played all of that album, in fact, starting with the dank, slide guitar-soaked "Off to One Side'' and ending with an IV-drip slow, charred cover of the Stones' "I Got the Blues'' for the encore. In between were scarred expositions ("Sad Eyes''), blistering burns ("Dead Molly''), and always, the intuitively interlocking interplay between Zedek and Brokaw. If there was any rust on bassist Sean O'Brien and drummer Arthur Johnson, it had been quickly scraped off by the gashes of guitar and the churning roil of a sound that, for one night at least, transcended decades and discographies. -[Boston]

The above review comes from Come's 9/26 reunion appearance at TT the Bear's in Cambridge, MA, the first of two recent shows they played in 2010 (the other was at Matador 21). Now comes word that the band will expand their reach to NYC by playing The Bell House on April 16th with Eleventh Dream Day (who have a new album coming soon via Thrill Jockey). Tickets are on sale.

Come's Chris Brokaw was one of the special guests scheduled to play with Jennifer O'Connor at the Rock Shop last night (1/11). If you braved the snow to see that, how was it?

Some video from Come's recent reunion appearances are below.