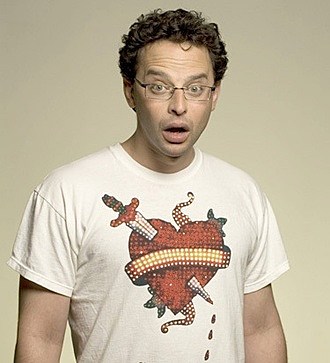 When Rififi shuttered it's doors back in 2008, the part of my brain that required comedy in order for me to live also shuttered itself, though not completely. I did, and still do, continue to see comedy, but for some reason when the Rififi option was off the table, my zeal plummeted to a dangerous low and I psychologically couldn't overcome it. Melodramatic, huh? Yeah. Rififi exposed me to bazillions of comedians who to this day I still regard as favorites, but one favorite who I haven't seen much of since Rififi's closure is Nick Kroll.

Nick is part of a gaggle of comedians, including Jon Daly, Brett Gelman, and John Gemberling, who kill me not so much for their stand-up prowess (though, they don't lack in that department) but more for the insanely funny characters they come up with and perform as on stage and in videos.

Nick's characters include Bobby Bottleservice (1/2 of the Ed Hardy Boyz), a Rich Dick, and Fabrice Fabrice, among others. I cannot remember the last time I saw Nick live, so I was chuffed to see that he is doing two Comedy Central tapings at the Music Hall of Williamsburg on November 18th, early and late. These tapings will amount to a future 1 Hour Nick Kroll comedy special called Thank You Very Cool. I don't know what to expect, but I am hoping it will feature both stand-up and sketch material. Get your tickets! For serious.

In other, closer-to-now-shows-news, did you get your tickets to see Kristen Schaal, Kurt Braunohler, and Reggie Watts at NYU's Skirball Center this evening (10/21)? It carries with it a $25 price tag, but if you've got it spend it! You have to support your local favorites when they hit the larger stages people. Be loyal, not a dicknose. Oh, and you also might be able to get in to this one with your CMJ badge.

OK. Fine. I totally get it. You were a good pup and bought your tickets to tonight's comedy-free BrooklynVegan CMJ showcase happening at the Music Hall of Williamsburg. That was a smart move, and I now see why you didn't buy your tickets to see Ms. Schaal, Mr. Braunohler, and Mr. Watts at Skirball tonight.

So, since you missed the show at Skirball tonight, you should be happy to know that you can still see Reggie Watts for FREE at the BrooklynVegan and Converse FREE Saturday Party that's happening at Public Assembly from 12:00pm - 6:00pm.

Once you've had your fill of beer and other free goodies Saturday, you and your buddies are going to hop in a cab and head over to Union Hall for the Heart of Darkness: A Night of Forgiveness and Salvation CMJ show that features Greg Barris, Reggie Watts (again!), Kurt Braunohler, Dave Hill (who's band Diamondsnake has a show coming up at Mercury Lounge), and Kristen Schaal. There will also be music by The You Are Forgiven Choir featuring Ariel East, Mother of Three and New Beard. Tickets are only $10 and are, inexplicably, STILL AVAILABLE.

So tonight, Tivo Night of Too Many Stars and rock your socks off with BV at the Music Hall. And then on Saturday, see a ton of comedy and music, drink for free, and go to bed happy for a mere $10.

flyers and videos below...