The past week saw the opening of a new Comedy Cellar location in Las Vegas, the closing of legendary LA venue The Meltdown, a crossword puzzle from Weird Al, the announcement of a Megan Mullaly residency at Cafe Carlyle, and Kathy Griffin's pitch-perfect portrayal of Kellyanne Conway. And there's still plenty to be excited about this week in comedy, including a new special from British comic Greg Davies on Netflix April 10 titled You Magnificent Beast. There's also the premiere of Wyatt Cenac's Problem Areas,  The Daily Show correspondent's new HBO talk show, on April 13. Here's the synopsis from HBO:

Cenac, a longtime correspondent for “The Daily Show,” examines a wide range of social and cultural problems facing Americans in the show, which will feature documentary-style field reports that serve as the focal point of each episode. These segments will take him around the country, from suburban Minneapolis to downtown Cincinnati to rural Texas, as he investigates systemic issues from his unique perspective. Cenac will also tackle more benign problems facing Americans, offering comedic solutions to everyday inconveniences. In addition, WYATT CENAC’S PROBLEM AREAS will feature in-studio commentary on current events, addressing issues and engaging the audience to keep the conversation going through social media.

You can watch the trailer for Problem Areas here:

One show that has yet to reveal its season premiere date is the ever-relevant, ever-irreverent Broad City. While fans have been waiting on baited breath for the date of Broad City's season five premiere, both Abbi Jacobson and Ilana Glazer have been busy with their own independent projects. Glazer has used her down time to expand her Yas Queen Yas (a.k.a. "YQY") tour with Phoebe Robinson, adding three dates at Union Hall and two dates at Music Hall of Williamsburg, which are all sold out.

If you didn't get a chance to grab tickets to those shows, you can catch Glazer at one of several upcoming stand up showcases happening this month. Tonight (4/9), she joins Nikki Glaser (no relation), Erik Bergstrom (Comedy Central), Krystyna Hutchinson (Guys We Fucked podcast), and Nick Kocher (BritaNICK, SNL) at UCB East for We Hope YOU Have Fun, a stand up showcase hosted by Ruby Karp. She'll be at The Bell House on Tuesday (4/10) for a gun safety fundraiser, "Thoughts and Prayers." On Monday, April 16, she performs at The Mailroom as part of a twice-monthly showcase hosted by Seth Herzog. Other guests on that lineup include Janelle James and magician Josh Beckerman (more info).

Meanwhile, Abbi Jacobson stars in the Netflix drama 6 Balloons, which premiered last week. The film co-stars Dave Franco, Tim Matheson and Jane Kaczmarek and the log-line is "Over the course of one night, a woman drives across LA with her heroin addict brother in search of a detox center, with his two year old daughter in tow." Here's the trailer:

In addition to some of the shows mentioned above, there are tons of other comedy shows to go see in NYC this week. Here are some highlights.

Whiplash @ Union Hall
After years as a Monday night staple at UCB, the legendary stand up showcase has found a new home at Union Hall. A few things have changed (the show starts at 10 PM and tickets are available online), but the lineup is still a surprise. For the premiere of the show's new location, however, it's reasonable to expect big things. (past guests have included John Mulaney, Sarah Silverman, Eugene Mirman, and plenty of other huge names in comedy. There's even a concert film of the show.) (tickets)

Thoughts & Prayers: A Mandatory Assembly @ The Bell House
The New York comedy community continues to show support for Everytown for Gun Safety with this fundraiser hosted by Kristen Buckels and Lacey Jeka. In addition to supporting an incredibly worthy cause, the lineup boasts some incredible comedians: Aparna Nancherla, Jo Firestone, Ilana Glazer, and Dan Soder. Sold out.

RUDE One Year Anniversary @ South 4th Bar
This experimental showcase is celebrating its first anniversary with a night of shows, including an escape room/comedy show hybrid at 9 PM featuring RUDE's founder Ian Lockwood, an "Anything But Comedy" anti-comedy showcase hosted by Dash Turner and D. Arthur, and RUDE's flagship stand up show, hosted by Sophie Zucker and Charlie Bardley and featuring Alise Morales (Betches Love This), Mary Houlihan, and Ayo Edibiri. 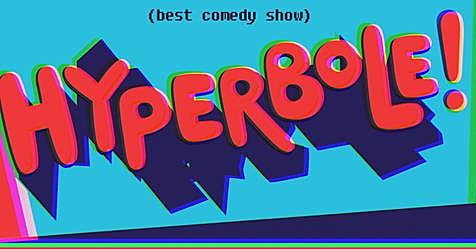 David Cross @ The Bell House
While we wait for the fifth season of Arrested Development, David Cross continues to try new stand up material at his "Shootin' the Shit, Seein' What Sticks" shows, which began in January (tickets). Graduating to the Bell House after many shows at Union Hall and Littlefield, David also plays April 16 and May 1. Tickets to all three Bell House shows are still available.

Hyperbole! @ The Creek and The Cave
Hyperbole, as the name suggests, is a comedy show with added pizzaz in the form of a T-shirt cannon and raffle giveaways. But if that weren't enough, the lineup is pretty great too, featuring Jo Firestone, Joe List (Netflix's The Standups), Sydnee Washington, Kate Willett (This Is Not Happening), and Rebecca O'Neal. (tickets)

Adam Pally Presents: Vino Diesel @ UCB Hell's Kitchen
Vino Diesel is a monthly improvised show wherein Adam Pally (Making History, Most Likely to Murder) invites a sommelier to teach him about wine while he attempts to make sophisticated conversation with "interesting people from the fashion and business world." (tickets)

Biosong with Tommy McNamara / Joey Dundale, Come Alive! @ The Brick
The Brooklyn Comedy Collective presents this double header, featuring a solo show from masterful character actor Joey Dundale of IFC's Video Frogs, as well as a more musical offering from Tommy McNamara with Biosong. For his part, McNamara will interview two guest comedians – this week, it's Josh Gondelman and Clare O'Kane – and then draft a song about them as they perform stand up. He will then, of course, perform the song live that night. (tickets)

And on the heels of opening their new Las Vegas location, the Comedy Cellar once again has great offerings throughout the week, including stand up from Mike Birbiglia (April 10 and 11), Chris Gethard, Michelle Wolf (who was also recently featured in Seth Rogen's Hilarity for Charity Netflix special), Todd Barry, and Matteo Lane (April 12). Check out their schedule for more details.