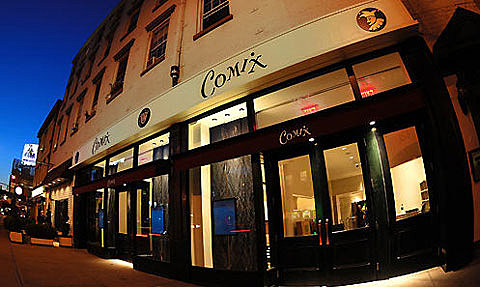 One of the semi-necessary evils of comedy is the dreaded visit to a formal comedy club. Let's face it people; this city is overflowing with awesome comedy shows happening at all sorts of small, fun, intimate venues. Yet once in a while a comic rolls into town for three nights of gigs at a comedy club, and you have no choice but to bite the bullet and venture in. I mean, he/she might end up at one of your smaller shows to workshop material. But he/she might not either. Ugh. The hefty cover charge. The cattle herding method of corralling people into the room. The army of drink servers in your peripheral vision for the entire show. The likelihood of a bachelor/ette party treating the show like their personal (Doug) Benson Interruption (catch HIM at Gramercy on 5/21/11). The two-drink minimum. And Cod forbid someone at a neighboring table orders something from the menu that smells like the feet of someone who ran 50 miles in 100 degree weather in boots full of brie cheese. Yes... I know... these shows represent a significant amount of bread and butter for our favorite laughsmen and women. No doy. But, man, am I the only person whose hypersensitive neuroses go buck wild at a comedy club show?

And yet, Comix comedy club always seemed to do everything they could to take the sting out of all these common perils. Over the course of several years, Comix consciously evolved their business model to draw everyone from indie comedy snobs to mouth-breathing over-cologned douche bags and created an environment where we could coexist happily together. They had a superior crew of behind the scenes staff that kept the programming super diverse (FYI, Kambri Crews is one of the nicest people you will ever meet in the biz). They turned the basement area into Ochi's Lounge; a super cheap way to see up-and-coming locals perform alongside comedy veterans like Jim Gaffigan. They opened up their main upstairs bar early to anyone who wanted happy hour drinks with zero commitment to seeing the show happening in the main room or downstairs. They were the proud and clearly enthusiastic hosts of the ECNY Awards show (of which BV was nominated once), complete with red carpet and all the other accoutrements one might expect at your larger awards shows. Their support of NYC's lesser known comedians was nothing less than inspiring. They also hosted all kinds of benefits for all kinds of causes. Their cover was always about half of what you'd expect at a place like Carolines, and their menu was eclectic and very reasonably priced. I've seen so much great stuff there including Flight of the Conchords, Zach Galifianakis, Marc Maron, Brian Posehn, Paul F. Tompkins, The Marijuana-Logues, John Oliver, Kurt Braunohler and Kristen Schaal's Hot Tub Variety Show, Maria Bamford, Andy Kindler, David Cross and a phonebooks' worth of other talent. And, yes, you can see someone like Todd Barry on any given night in NYC (like tonight at Whiplash), but to see him do an hour-plus headlining set in your own backyard is priceless.

But this is New York, where institutional lifespans are grotesquely short. Comix began to lose steam and eventually found itself sold to a couple of jerks who decided it'd be in the venue's best interest to become NYC's next Copa Cabana. Their idea was to devise a half-assed, dated and schizophrenic programming model that would cover everything from burlesque to smooth Jazz.

The new owners tried to promise all sorts of things when they spoke to me last month, but things quickly went south. How quickly? Within days, veteran stand-up comedian Bobby Slayton was telling anyone who'd read his Twitter feed that he and others had been stiffed on their paychecks by the club. Apparently, there was a million-dollar investor who the owners were relying on, but who stiffed them instead. Then comics weren't the only workers getting stiffed by the club. More employees were let go. The club stopped restocking paper. And on Saturday, performers were notified when they showed up that this was it. There will be no more. It was a beautiful space and everyone from comedians to employees loved it, but whether it was location location location, or something else, Comix never quite worked as perfectly as it should have. - The Comic's Comic

I'm not saying that the closure of Comix is like the closure of CBGBs or anything. But for a long time they were doing everything right. For it to end up on the auction block for some other group of twerps with too much money and no vision kind of depresses me.