MAJOR UPDATE: There will be concerts @ Williamsburg Waterfront this summer! (ticketed and free) 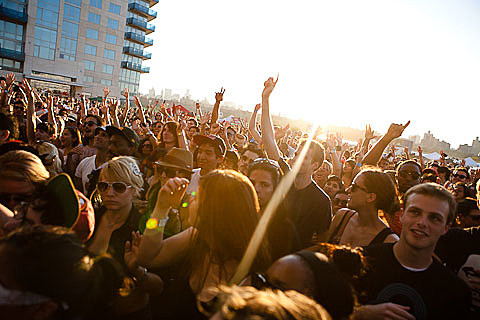 Brooklyn 11211 blog writes about what went down at last night's CB1 meeting...

"A number of local residents got up during the public session (which usually happens after most of the public has left) and complained about the concerts at East River State Park (the "OSA" concerts). Basically, their complaint was that all the things that Greenpoint residents were afraid would happen if the Brooklyn Night Bazaar went down were already happening to them. Loud music (very loud music if you happen to live right there). Crowds of people walking to and from concerts (and much less steadily on the from side). In other words, a regular shitshow 10 or 15 times each summer.

So, the Community Board voted (unanimously) to ban the waterfront concert series from East River State Park.

It happened before an empty house - I guess the press left before the news happened."

"After the crowd cleared out the public was allowed to voice their opinions. What came up was the waterfront concert series held at the Williamsburg Waterfront / East River State Park and the cluster-fuck it causes every Saturday and Sunday. The throngs of people ebbing and flowing and the VERY loud music being pumped through the sound stage were the biggest issue and as such, the board voted to ban the waterfront concert series at East River State Park (Williamsburg Waterfront)."

First of all, that sucks. But this is confusing...

...lots is unclear actually, and I'm just thinking out loud (and I know nothing about how these things work, and I only just read those two blog articles so details might be missing.). Am I missing anything? To be continued...

UPDATE: Someone wrote in and told me, "I was at the meeting. The board voted for the ban. Not sure whether it's a final thing or not. I would say that its not looking good though. People are ridiculous. Williamsburg neighborhood backlash will get much worse over the next few years."

UPDATE 2: A commenter asks, "do the community boards actually have the power to ban concerts? I was under the impression that they don't have direct power over anything, but that they make recommendations that are usually followed by the relevant City agencies." That makes sense. "Voting to ban" is probably different than actually banning it, though the titles of the two linked blog posts above are "Williamsburg Community Board BANS Waterfront Concerts" and "WILLIAMSBURG BANS MUSIC."

MAJOR UPDATE: There will be concerts @ Williamsburg Waterfront this summer! (ticketed and free)

In related news, the beginning of the same community board meeting (the part that had the big crowds and press) is where they discussed not allowing any more liquor licenses in Williamsbrg.