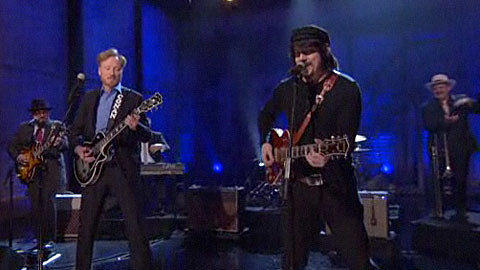 Conan O'Brien (you know him from Twitter) returned to television (basic cable) last night (11/8) with his new, and simply titled show Conan (he joked they can't replace him now). Guests included Seth Rogen, Lea Michelle, and Conan's good friend Jack White, who not only was the last musical guest on Late Night with Conan O'Brien (as was Meg), but who has known Conan since 1999. Well, that's at least what Conan claimed on the show, but not surprisingly, he was at least partly joking. He told Rolling Stone the full story:

In Detroit, there's a place where you can get a bite to eat, and then go bowling, and there's a rock venue there too," Conan recalled. "When I was there -- I wanna say this is like 1999 -- I got a bite to eat with my crew, and then we decided to go bowling, and these kids started to come over and hang out with us. I don't even remember -- I just remember hanging out with all these really young, scruffy Detroit kids for a while, all of us talking and drinking beer.

"Flash forward to: the White Stripes are the big deal and they're on Saturday Night Live, and I really love them, so I went to watch them at rehearsal," he continued. "After they're done rehearsing, Jack and Meg walk down -- and they're coming right at me. And they said, 'Hey, it's good to see you again.'

"And I said, 'Again?' They said, 'Yeah, in Detroit you hung out with us for like three hours and had beers in a bowling alley and we just shot the shit and you were real nice.'"

Conan erupted into laughter. "And I'm like, 'I didn't know that was you guys!' "

Conan, who performed with Jack on last night's show (as you can see in the above picture), also showed off the recent records that Jack put for him after he performed and recorded at Jack's Third Man Records studio in Nashville over the summer (order them HERE). That performance took place on Conan's 2010 live tour which happened while he was away from television. That tour, complete with the same house band who are on the new tbs show, included a stop at Bonnaroo and two guest-filled nights at Radio City Music Hall in NYC (night one and night two).

Video from last night's show below...