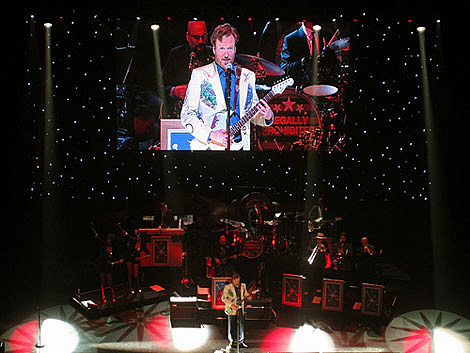 The approach, judging from Monday night's performance, was to sweep in with a torrent of energy (or as O'Brien put it in a Twitter post, a "towering tsunami of dry, self-deprecating humor"), high spirits, music, video bits, flashing lights and a crew of old favorite faces and routines. Andy Richter was back, along with LaBamba and the band (though not Max Weinberg), a bear with a certain self-gratifying habit, Triumph the Insult Comic Dog was there on tape, along with other schtick the sellout crowd ate up with gusto. For surprise, there was a brief appearance by Jack McBrayer, aka Kenneth the page on "30 Rock," and the band Spoon [whose own current tour happened to be in Oregon on the same night].

It was plain that this was the first stop on the tour, and cast and crew were getting a feel for what worked and what didn't. At times, the show seemed to cheerfully roll around like an out-of-control soccer ball. But O'Brien and crew always managed to bring it back from the "where-is-this-going?" episodic brink. The proceedings could stand some tightening and trimming -- Conan, we know you love that guitar, but a few of those songs should probably go -- but everybody was giving it their all.

At times, it almost felt like we were watching O"Brien's TV show, with the big-screen display on the stage behind him beaming out his face, and some delightfully loose back-and-forth banter between Conan and Andy. All in all, it's hard to get too crabby about a show that tries to squeeze in so much comedy...The Oregonian]

Conan's "The Legally Prohibited From Being Funny on Television Tour," which kicked off last night (Monday, 4/12) in Eugene, Oregon, comes to Radio City Music Hall for two nights on June 1st and 2nd. Those are sold out, but some tickets are still available for his May 30th show at the Borgata in Atlantic City.

The first night of the tour coincided with the news that Conan would be hosting a new show on TBS this November.

Videos of songs, sketches and dancing from night one (though none of Spoon unfortunately) are below...

Conan O'Brien Singing on his First Night of Tour

Conan O'Brien Singing "I Will Survive" on Tour