Improv Everywhere is the group responsible for the No Pants! subway rides. It most recently pulled off an April Fool's Day stunt where the group showed up en masse to a random, underattended funeral to make it "The Best Funeral Ever." It turns out the whole thing was staged, a fact the CW11 piece on the stunt failed to note (videos below).

Another recent-news tidbit from the Roosevelt Live performers, Frances frontman Paul Hogan scored indie-doc Must Read After My Death, which played at Manhattan's Quad Cinema in February and is now available for download at Gigantic Digital. Frances also plays the 92YTribeca on Saturday, April 4th with The Subjects and Glass Ghost. (Tickets for that show are on sale.)

Frances' Roosevelt Live performance takes place on June 20th, the same day that music blogger collective "After The Jump" is planning a festival on the same island. No more details on that one yet.

Full schedule (and flyer) with videos from the above-mentioned acts (plus a Coldplay tracked video of Roosevelt Island) below... 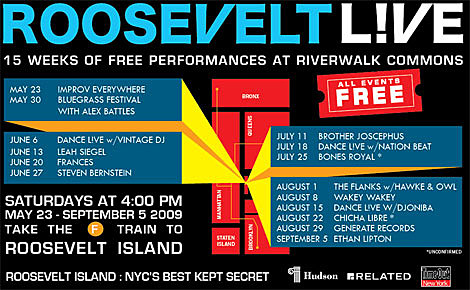 Frances in the studio