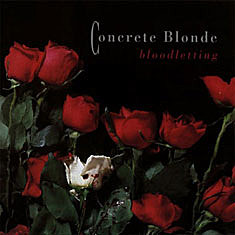 Hard-rockin', goth-tinged Concrete Blonde are reforming for the 20th anniversary of their album Bloodletting, which spawned the band's only Top 40 hit, "Joey." The reunited band, who haven't played together for five years, will play Webster Hall on Thursday, June 10 and tickets are on sale this Friday (4/9) at noon. There aren't a lot of details to be gathered from Concrete Blonde's official website (like full tour dates), but it sounds like another of these "play the album in full" tours.

Formed in Los Angeles in 1982 by singer Johnette Napolitano and guitarist James Mankey, the band was originally called Dream 6 until Michael Stipe suggested they change their name to Concrete Blonde. Bloodletting was the band's third album which, in addition to "Joey", found Modern Rock radio success with the LP's title track -- that has since been used in more than one Vampire movie/TV show over the last 20 years. The band made two more albums before breaking up in 1995.

Napolitano and Mankey revived the band in 2002 for two more albums but got back together for a sixth studio album and tour in 2002 before breaking up again in 2006.