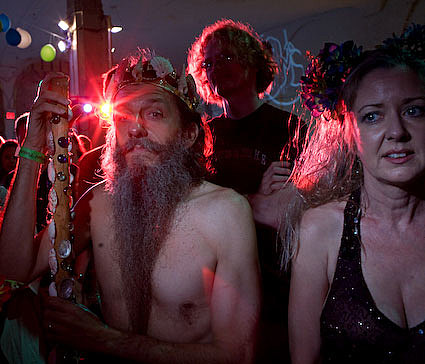 The 2009 Mermaid Parade will take place on Saturday, June 20th (2PM) along Coney Island's boardwalk. If you'd like to march (or volunteer) in this year's parade, registration is now open. Directions and new parade route, below.

The beaches at Coney Island, as well as the Cyclone, are both now open for the summer. The fate of the destination spot has been in limbo for quite a while. Astroland's "final year" was initially to be 2007. That was delayed until after the 2008 summer season -- since then, the old rides have been dismantled, and new ones have been put in their place, kinda, sorta...

What will finally end up in the spot is still in question. Thor Equities, the company that runs the former Astroland lot, announced earlier this year that it'll be setting up "Dreamland" amusement park. Curbed (which has recent pics of the condition of the site) reported on the new park's Friday, May 15th opening...

What was supposed to be a big day on Coney Island is already a bit of a bust. Today marks the grand opening of Festival by the Sea, the summertime amusement park and flea market set up by developer Joe Sitt on the former Astroland (pardon us, Dreamland) and other parcels owned by Sitt's Thor Equities. The hyped attraction is supposed to serve as Sitt's proof that he knows what's best for Coney Island's redevelopment, but a funny thing happened on the way to the freak show: the Brooklyn Paper reports that half the rides haven't arrived and the vendors will be "exposed to the element because of a tent mishap." [Curbed]

Add that to the fact that the City has made an offer on the lot to the tune of $105 million.

If the Coney Island development circus isn't enough, the actual circus is coming to the boardwalk on June 18th -- the Times makes the appropriate connections. Luckily, there's at least a slim chance that the circus' days in NYC may soon go the way of Astroland...

Almost half of City Council members [have signed] onto a bill that would prohibit "the display of wild or exotic animals for public entertainment or amusement." Other animals included in the bill: dolphins, walruses, hippopotamuses, giraffes, koalas, kinkajou, sloths, tarantulas, rhinoceroses and armadillos. Despite the extensive taxonomy in the bill, essentially everyone admits that the primary target for the legislation is the Ringling Brothers and Barnum & Bailey Circus.

The bill, which has circulated for many years in different local legislatures, has [recently] drawn renewed attention in New York City with Ringling Brothers arrival [on March 26th] and [late-March] closing arguments in a federal lawsuit that accused the circus of mistreating its Asian elephants. [NY Times March 26, 2009]

Footage of the 2008 Mermaid Parade (kinda NSFW), with directions and its new route, below...

The best way to get to Coney Island is to take the D, F, N or Q subway to Stillwell Avenue. The Coney Island amusement area is also accessible via Exits 6 and 7 on the Belt Parkway.

* The Parade will roll east to West 10th Street

* at West 10th Street the Parade will turn south towards the boardwalk.

* cars and motorized floats can park on West 10th Street

* At the Boardwalk, the marchers and push-pull floats will turn west and head towards West 15th Street.

* At West 15th Street the Parade will disband.