the concerts will be at Surf Ave & 21st St 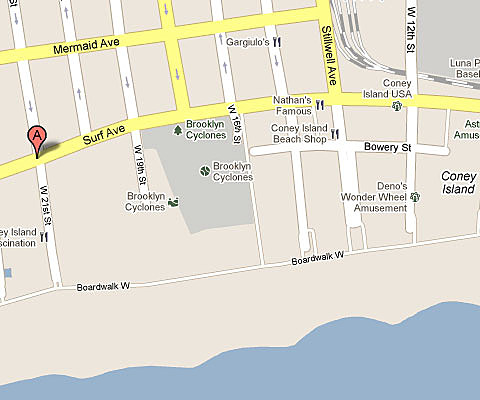 "Earlier this month, Brooklyn music fans were disappointed to hear that, in the middle of a legal wrangle involving noise complaints, the city Corporation Councel ordered that Borough President Marty Markowitz can no longer use Asser Levy Park for his well-known summer concert series.

Monday, however, that situation was resolved, at least temporarily. Markowitz and Seaside Summer Concert Series Executive Director Debra Garcia announced that the series will be held this year at an empty lot on West 21st Street in Coney Island, the former site of the Ringling Brothers Barnum and Bailey Circus.

"We could not have done this without the great team at Taconic Investment Partners, who own the site that will host the shows. Their generosity and hard work were instrumental in making sure that the shows will go on this summer in Coney Island," said Garcia and Markowitz in a joint statement.

The weekly shows will begin in July, although the lineup has not yet been announced." [Brooklyn Eagle]

The 2010 concerts happened in Asser Levy Park thanks in part to Mayor Bloomberg. Earlier in 2010 lawsuits were filed by local synagogues who are mad that Marty Markowitz wants to build a bigger amphitheater in the park. Those lawsuits are now apparently being taken more seriously, barring the concerts while the battle is pending. Marty is confident that concerts will again return to Asser Levy Park though. In other words, he is confident he will come out on top when he has his day in court.