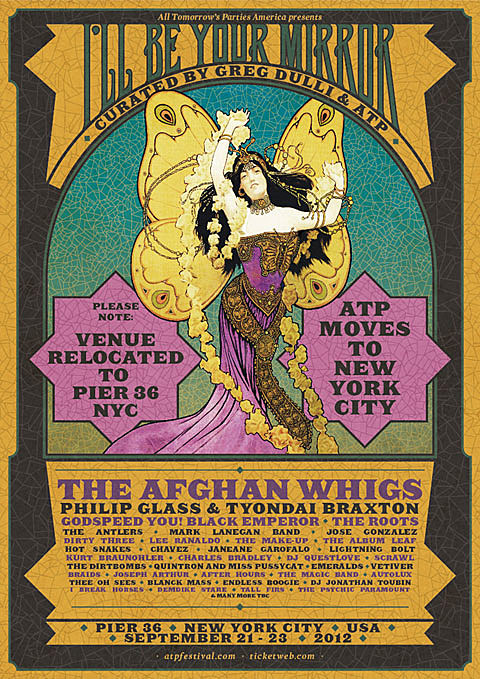 That didn't take long. Last night we posted it as a rumor. Today it is confirmed (removal of Louis CK included):

ATP Concerts today announce the relocation of this September's New Jersey based I'll Be Your Mirror festival event to Pier 36 in Manhattan, New York.

Pier 36 was the intended home for I'll Be Your Mirror beginning in 2013 - but due to unavoidable logistical concerns (along with a lack of available fan accommodations in Asbury Park), ATP has decided to move there for this year's event.

Some artists who are unable to play the new location - the following statement comes from Louis CK's management:

"Louis CK who was originally scheduled for the Asbury Park event will not be performing at ATP in Manhattan due to scheduling conflicts. Check louisck.com for info about his tour schedule."

Sharon Van Etten, Reigning Sound and Factory Floor will also not be available to perform. All other previously announced artists will perform as originally scheduled.

"We hope that the new venue will make for an incredible event and open up many other accommodation options to fans who were unable to find rooms in Asbury Park," comments ATP's Barry Hogan. "We sincerely apologise to those inconvenienced by the move and hope that any problems caused may be minimised by the relatively small distance between the two locations. Anyone who is unable to attend due to the move or due to the cancellation of Louis CK can claim a full refund by contacting their ticket agent between now and July 31st."

Pier 36 is a new indoor venue sitting on the edge of the East River between the Manhattan & Williamsburg Bridges - it's outside area boasts glorious views of Brooklyn and the Statue of Liberty.

The Saturday night of this year's festival will be headlined by The Afghan Whigs (who have reunited after a 13 year hiatus) and curated by their frontman Greg Dulli, with ATP curating the Friday and Sunday nights.

Tickets are on sale now via ATPfestival.com priced at $199 for the Weekend, with Day Passes also newly available priced at $60 for Friday & $75 for Saturday/Sunday.

Full information on the additions to all three days of the line-up...

Friday will feature both music and comedy - we can now announce a musical headliner for Friday, as esteemed composer PHILIP GLASS teams up with TYONDAI BRAXTON (former Battles frontman) for a completely unprecedented live collaboration. Other stellar additions to the day's musical line-up are LIGHTNING BOLT - one of the world's most unmissable live acts, and LEE RANALDO of Sonic Youth. Joining the Friday on the Comedy stage is none other than standup/actress JANEANE GAROFALO, newcomer KURT BRAUNOHLER, with more to be confirmed. Friday tickets cost $60.

Saturday, headlined by THE AFGHAN WHIGS and featuring a stellar list of artists chosen by the Whigs' frontman Greg Dulli, has three new artists. First up are alternative rock band CHAVEZ, who returned to the live arena in the last few years to much acclaim, and they're joined by Italy's AFTERHOURS (past collaborators with Greg Dulli) and Ohio based singer/songwriter JOSEPH ARTHUR. They join the previously announced Saturday line-up of The Afghan Whigs, The Roots, José González, Mark Lanegan Band, Dirty Three, The Antlers, The Dirtbombs, Scrawl, Emeralds, Vetiver, Charles Bradley And The Extraordinaires and DJ Questlove with more to be confirmed. Tickets for this day cost $75.

As well as the live music line-up and comedy on the Friday, our friends at The Criterion Collection will return to run the Cinema across the weekend. All three days feature DJs and other activities to be confirmed in the months ahead. Each day runs from noon-midnight.

Whether this is related to ATP filing for liquidation or not is not 100% clear (but who really cares). Updated ATP NYC lineup below... 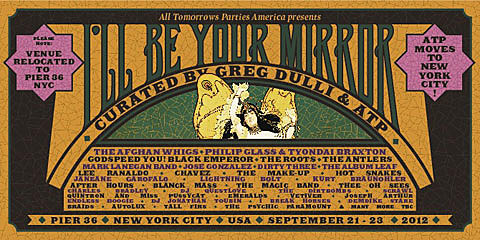