Arcade Fire at MSG in 2010 (more by Jonathan Bayer) 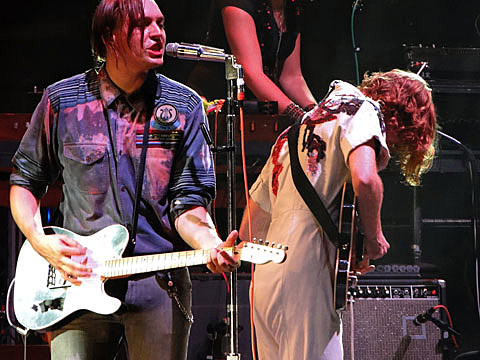 Rumors have been floating around for a while that Arcade Fire have teamed up with fellow indie superstar James Murphy to work on their upcoming fourth studio album (expected to be out in 2013), and now Arcade Fire Tube is pointing to a confirmation in Music Week that they are in fact working together. Markus Dravs, who produced the last two Arcade Fire albums, is working on this one as well. In the article, Arcade Fire's manager Scott Rodger is quoted saying:

They're in with James Murphy on three or so songs, plus Markus Dravs who is a long-time collaborator. They write too many songs - that's a good problem to have. There's around 35 songs with Arcade Fire, two albums'-worth for sure.

Arcade Fire and James Murphy have a long running relationship, which has included Arcade Fire joining LCD Soundsystem at their final show. A video of the two bands playing "North American Scum" is below.