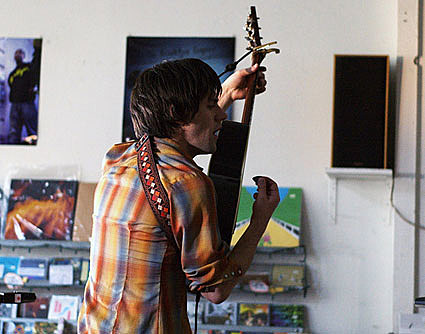 "With these two literate albums out this year and a knockout performance at the recent C.M.J. festival in New York, he has critics buzzing that he might be the next Bob Dylan. But for the kids who make up the audience tonight, Dylan is grandpa. The club smells like a high-school gym, of teenagers in heat. The kids are hip in the studied way of those who take advanced-placement English classes. Oberst thanks everyone for showing up. He shuffles his feet, as if overcome by a fit of modesty. He chugs from a bottle of wine." [The NY Times, 2002]

Conor Oberst played two shows in NYC yesterday (August 12, 2008). The first was an early one in a store (pictured). The second was a proper headlining performance in a venue significantly smaller than the venues he'll be playing next time he returns to town. Grandpa played a show in Brooklyn on the same night. Conor Oberst's self-titled album on Merge is out now. Last night's Bowery Ballroom setlist below...