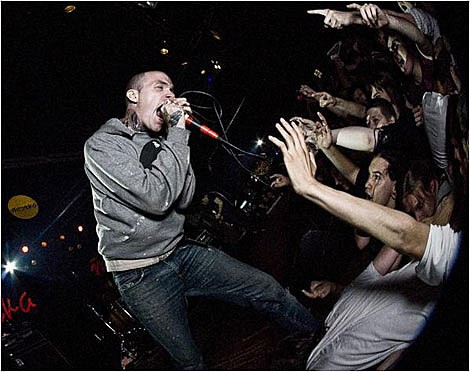 All signs point to Genghis Tron off of the previously announced Deathwish super bill of Converge, Pulling Teeth, Rise & Fall, and Ceremony (now ex-Deathwish) at Europa in Brooklyn on March 27.

UPDATE: Genghis Tron said they will know for sure soon whether they will be playing this show or not. Stay tuned...

UPDATE 2: Genghis Tron are in fact also playing this show.

Now some good news... Coliseum has been added to the Europa bill!

Even more good news: It's part of a seven date mini-tour leading up to the recording of their new long-player in May. Look for the follow-up LP to No Heroes to land on Deathwish/Epitaph later this year. Converge is also playing the embarassingly awesome Scion Rock Fest in Atlanta, GA.

Supermachiner originally began as a collection of four track recordings by J. Bannon (Converge) in 1994. The music was much different than his known vocal work in Converge, having more in common with influences Swans, Bauhaus, and others... Along with the help of good friend Ryan Parker (Daltonic, Black Spot, The Jaded Salingers), the project was brought back to life in the winter of 1998...

The two entered the studio with Kurt Ballou (Converge) in the winter of 1999. During these sessions, Ballou also contributed a great deal to the material. The finished album titled "Rise Of The Great Machine" was released by the defunct Undecided label in 2000 (now out of print). After the album release, future projects were planned but never materialized...

"Rust" features the sought after "Rise of the Great Machine" tracks, as well as four track ghosts of forgotten songs, and other unique audio experiments. All of it showcasing the artistic spirit that made Supermachiner such a unique animal for the time. All the while foreshadowing the future marriage between the "post hardcore" and "shoe-gaze" genres that dominate today's avant garde/experimental music world.

All Converge dates and a Coliseum video below...

Coliseum - "Fall Of The Pigs" LIVE in Japan