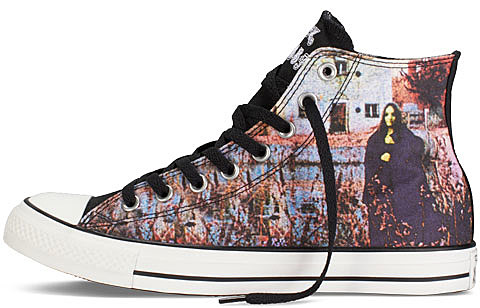 Converse just released a new series of Black Sabbath Chucks, which actually look pretty cool. One side of one is pictured above. All three are at Converse's site. Black Sabbath is playing Brooklyn in March and touring in April. Bill Ward won't be there, but look for him at the next Today is the Day show.

In other music-related Converse news, this weekend is the third edition of the FREE creative workshops they're holding at Rubber Tracks Studio in Williamsburg. Registration is open through 1/9 at midnight for "How to Record Live Instruments" with Benjamin Weinman & Billy Rymer of the Dillinger Escape Plan and "How To Record Using Outboard Effects" with EL-P & producer Nick Hook. As previously mentioned, El-P will also headline a show at Rubber Tracks on 1/24. Details on that are still limited.

Meanwhile, Converse's 'Rubber Tracks Live' series of free shows continues tonight (1/9) in Boston at The Sinclair with Joey Bada$$, Dillon Cooper, and Cavalier, and then January 16 at Glasslands in Brooklyn with The Hood Internet, Pictureplane, and Bearstronaut.