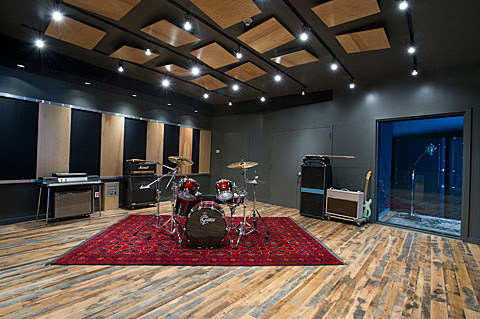 Just in time to remind people that Vans is not the only sneaker with a new presence in Brooklyn...

That text comes from a press release Converse sent out. An article in the Wall Street Journal mentions that Converse has the lease for 5 years, and reminds us that...

Along with its famous density of music acts, Williamsburg also has a surplus of recording studios. At least four professional studios operate within four blocks of Rubber Tracks. Converse also had reason to worry about riling the locals.

"It's a scary situation to have people give recording time away for free," says Oliver Straus, owner and chief engineer at Mission Sound Recording. He says [the marketing company who helped Converse set up the Studio] Cornerstone approached him a couple years ago with the idea of running the operation out of his studio on Powers Street. But as Rubber Tracks took shape as a stand-alone facility, he says, "there were many assurances that this would not be an adversarial thing."

--
MORE from the Converse press release...

"Knowing how hard it is to make a living as a musician and the amount of money it takes to get into a studio of that caliber, it's unbelievably generous for Converse to provide it for free," said Ra Ra Riot indie rock band member and Brooklyn resident Rebecca Zeller. "Coupled with the fact that artists retain all rights to their music is a testament to Converse."

Every artist entering the studio will be afforded the unique opportunity to record their original music using state of the art equipment and instruments supplied solely by Guitar Center...

...This summer, in addition to giving musicians the chance to record in a state-of-the-art environment, Converse Rubber Tracks will also host the GRAMMY Foundation®'s annual GRAMMY Camp®. Held for the past six years in Los Angeles, the program is expanding to the East Coast to reach a broader range of students. This summer, GRAMMY Camps are being held in Los Angeles from July 9 -18 and Brooklyn from August 2 - 8 at Converse Rubber Tracks.

The bands recording there now applied last year. Registration is currently closed, but keep an eye out in the future for a chance to record for free.

Head to the House of Vans for a free show by Superchunk and OFF! tonight (7/14). RSVP is open on Vans' site for tonight and future parties.