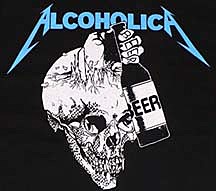 A Brewster police officer is on paid administrative leave after allegedly urinating on a fellow music-lover at a Metallica concert in Boston and then refusing to leave TD Banknorth Garden when security guards ejected him for disorderly conduct.

A Massachusetts Bay Transportation Authority Transit Police report from that night identifies Brewster Police Officer Joseph Houston, 29, as being thrown out of the Jan. 18 rock concert by security guards at around 10 p.m.

Although he has been charged only with trespassing, Houston appeared to be drunk, flashed his badge in an attempt to get back into the concert, called a black MBTA officer "Obama," and had been asked to leave the concert after he allegedly urinated on another patron, according to the report. [CapeCodTimes]

In related news, "Rumor going around Austin is that Metallica will be performing on March 21st @ Stubbs BBQ. Anyone else heard this rumor? That place only holds around 1500 people, so that would be killer is it was true."

Metallica, who was recently inducted into the Rock n Roll Hall of Fame, is definitely playing Nassau Coliseum in Long Island Thursday, and the Prudential Center in Newark this Saturday and Superbowl Sunday.