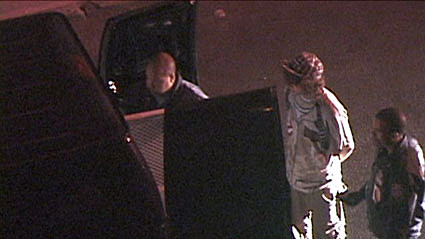 Cops showed up twice at the show happening in Sunset Park on Friday night (June 13, 2008). Frankpollis was about to go on around 2am. That's when the cops showed up for the 2nd time. That's when the party ended and approximately 8 people (including the guy in the above picture) were taken to jail without explanation to others at the party. Adam Green did not get to play, but he and his band were there and ready to go on last. He also wasn't arrested. More details soon.