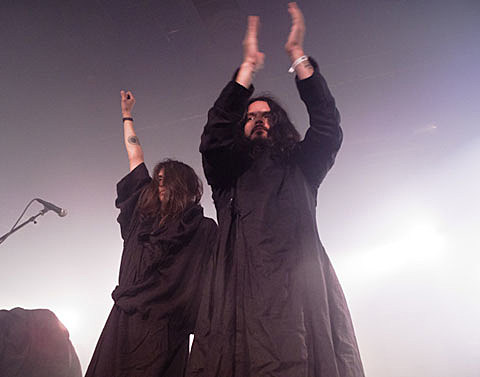 It's true that for a while the 100-year-old building buckled under all the power ALTAR was drawing, but after some ingenious electrical surgery the band played their entire set at its maximum volume, exactly as intended. If you were there you felt it throughout your entire body - it was mesmerizing. The cops did come to see what the noise was all about, right as ALTAR was playing their final song. They did not shut it down - in fact they seemed amused at the spectacle.

ALTAR, their crew, and the staff from All Tomorrow's Parties (on hand for extra support) performed incredibly last night. All bands should be so fortunate to have the kind of serious and dedicated fans that Sunn O))) and Boris share. It'll take a lot more than a temporary electrical hiccup to keep them from experiencing performances as rare and momentous as this one.

Pictures and more from the night coming soon.